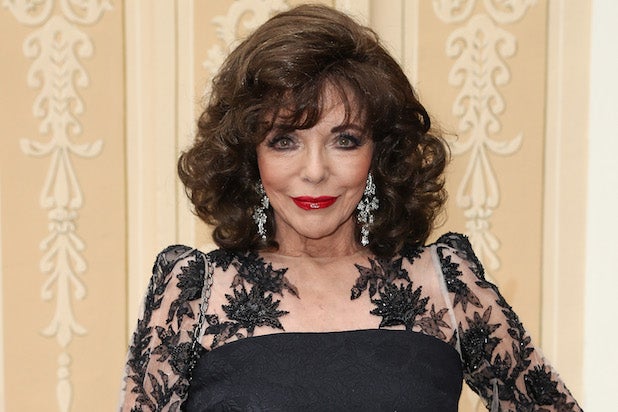 Good things come to those who wait — and who also have a ticket to the hottest Academy Awards after-party in town. At least in Joan Collins’ case, as the actress landed her role on the coming season of “American Horror Story” just by being in the right place at the right time.

“When I first saw it, I went to my agent and said, ‘I love this show. Can you get me a role in it?’ Nothing,” Collins told Town & Country in an interview published in the September issue. “Then I met Ryan Murphy at the Vanity Fair Oscar party, and we had a lovely conversation, but I really didn’t think much more of it. Two weeks later we go to see Barbra Streisand at the PaleyFest, and I didn’t know Ryan was going to be interviewing her. We go backstage afterward to see Barbra, and Ryan says, ‘I just made an offer to you!'”

“That was how I got ‘Dynasty’ too: meeting Aaron Spelling at a party,” she added. “A lot of things happen when you go to those parties!”

No details have been given about Collins character since news broke she’d joined cast of “American Horror Story” Season 8, which is a crossover between Season 1 (“Murder House”) and Season 3 (“Coven”).

Murphy announced the returns of “American Horror Story” alums Taissa Farmiga, Gabourey Sidibe, Lily Rabe, Frances Conroy and Stevie Nicks for Season 8 of the franchise, via Twitter on Tuesday. That news follows Sarah Paulson’s reveal during the Television Critics Association press tour last week that Jessica Lange is coming back as well. The Murphy darling will reprise her Season 1 character, Constance, for one episode.

“AHS” has already been renewed for a 10th season. Yes, Season 10, because the Murphy series was previously renewed by FX for eight and nine at the same time.

The renewal came as a bit of a surprise, amid Murphy’s upcoming move to Netflix in the wake of a giant $300 million overall deal with the streamer and his exit from the cable network’s sister studio 20th Century Fox.