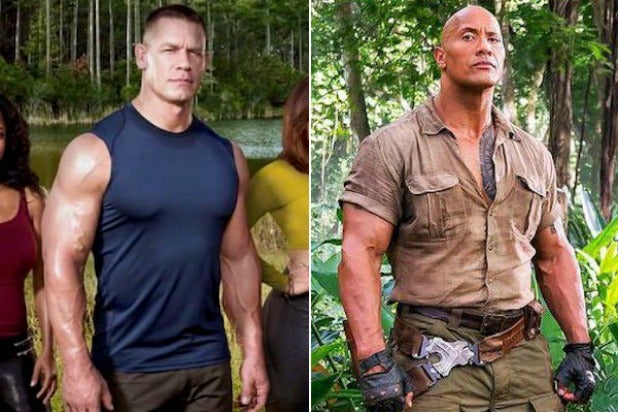 WWE Superstars-turned-Hollywood heavyweights Dwayne Johnson and John Cena are often compared to each, but SmackDown favorite Cena says they’re not even in the same class.

“The Rock is in a conversation by himself. He is an anomaly, he’s done unbelievable things in the world of sports and entertainment,” Cena told TheWrap on Friday as he prepared to host the Nickelodeon “Kids’ Choice Awards” for the second consecutive year.

“There is only one man even involved in that conversation and it is him, he sets the bar rather high.”

Johnson and Cena will be reunited at Saturday’s “KCA” at the Forum in Los Angeles, where the “Rampage” action star may or may not get slimed. (Spoiler alert: he definitely will get slimed.)

The pair have followed remarkably similar career paths — from college football players to professional wrestling and the WWE, spring-boarding from the ring into the box office with huge hits including “The Scorpion King,” the “Fast & Furious” series, “Jumanji,” “Trainwreck,” “Ferdinand” and “Daddy’s Home” collectively.

Also Read: 'Rampage': Dwayne Johnson Is Back to Save the World in New Trailer (Video)

They’re both also famed for their philanthropic work, with Johnson having launched the Dwayne Johnson Rock Foundation in 2006 and Cena holding the record for granting the most wishes in Make-A-Wish history.

“It’s guys like that who not only work hard but use their platform. He is unbelievably gifted at using social media to spread the fact that hard work is how you achieve success,” Cena marveled over his counterpart. “Hard work is also how you achieve significance. He inspires a lot of people, I don’t think he understands the depth of how much. He is someone I look up to — so if I look up to him, there’s no way we can be in the same conversation,” he said modestly.

The “Blockers” actor’s personal connection with Johnson, 45, goes back to even before 40-year-old Cena made his name in WWE.

“I sat down with him and we shared a special moment long before I stepped into a ring, he gave me his time and he was very kind and candid in his conversation. It is something I will never forget,” Cena said.

Check out both Cena and Johnson getting slimed at the “Kids’ Choice Awards,” airing on Nickelodeon Saturday at  8 p.m.