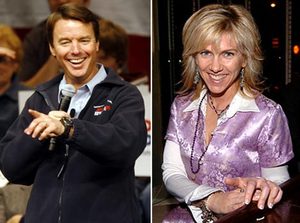 It’s hard out there for an ex-candidate, and for the newspapers who cover them. Take today’s explosive story, so far untouched by The New York Times, Washington Post or Los Angeles Times – or even Huffington Post. John Edwards, in our own L.A. backyard, was caught skulking from the room of a lovely blonde woman, not his wife, at the Beverly Hilton around 2:30 in the morning. Nailed! By National Enquirer reporters, who were skulking in the basement – waiting for him. The woman in question turns out to be the same Rielle Hunter that the Enquirer identified last December as Edwards’ mistress, who was pregnant at the time. All this on the background, don’t forget, of Elizabeth Edwards’ battle with cancer. Oh yes, and then there’s that presidential campaign. What a mess! But all ignored in the mainstream media. The story got no traction last December after both Edwards and Hunter denied their involvement. I can well imagine the tortured discussions in responsible newsrooms today: how to treat this story? Edwards is no longer a candidate (though he might be for v.p.). Is news of his having a mistress news worth reporting? Edwards will have trouble denying his involvement with Hunter now, and if he is the father of her child, that means he was lying back in December. How long can the papers avoid this story in the age of the Internet, bloggers like me, and guys like Matt Drudge, who’ve posted the National Enquirer tale?