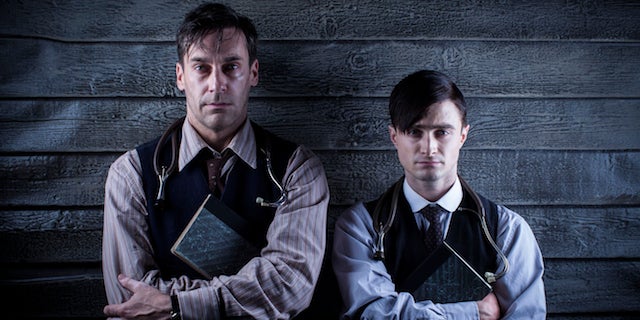 Arts channel Ovation has acquired the American rights to the U.K. hit, "A Young Doctor's Notebook," which stars Jon Hamm and and Daniel Radcliffe, the company said on Thursday.

Based on Russian writer Mikhail Bulgakov's book of the same name, the four-part miniseries is a darkly humorous account of the turbulent experiences of a newly graduated young doctor (Radcliffe), told through the eyes of his older, opiate-addicted self (Hamm), who narrates the action from his own notebooks.

Originally broadcast on Sky Arts in the U.K. last year, "A Young Doctor's Notebook" became the highest-rated program in the network's history, with audiences up over 1,000 percent on the slot average and receiving universal critical acclaim. Ovation, which struck a deal with BBC Worldwide for the rights, expects the series to debut in the U.S. sometime this fall.

"As a cause-based media company dedicated to the arts, Ovation is the perfect home for such a rich visual adaptation of this classic literary work," said Robert Weiss, Ovation's chief creative officer. "It's an honor to deliver work from artists as passionate about this project as Jon Hamm and Daniel Radcliffe."