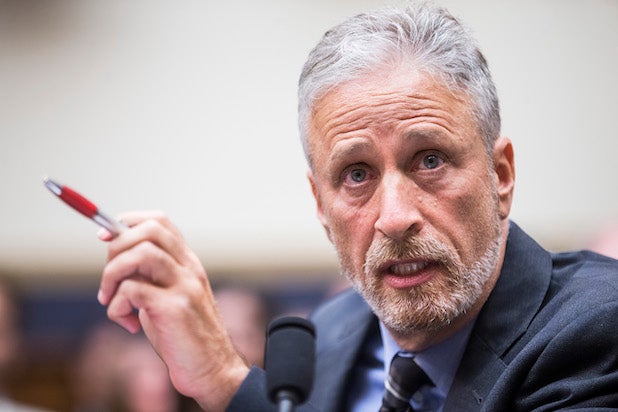 Former “Daily Show” host Jon Stewart thinks the Black Lives Matter protests that have erupted across the United States in recent weeks might finally lead to more accountability due to the increased size and intensity of those rallies in the wake of George Floyd’s death.

“Maybe. Look, every advancement toward equality has come with the spilling of blood. Then, when that’s over, a defensiveness from the group that had been doing the oppressing,” Stewart told the New York Times Magazine in an interview published Monday. “There’s always this begrudging sense that black people are being granted something, when it’s white people’s lack of being able to live up to the defining words of the birth of the country that is the problem. There’s a lack of recognition of the difference in our system. Chris Rock used to do a great bit: ”No white person wants to change places with a black person. They don’t even want to exchange places with me, and I’m rich.’ It’s true. There’s not a white person out there who would want to be treated like even a successful black person in this country. And if we don’t address the why of that treatment, the how is just window dressing.”

Stewart added: “You know, we’re in a bizarre time of quarantine. White people lasted six weeks and then stormed a state building with rifles, shouting: ‘Give me liberty! This is causing economic distress! I’m not going to wear a mask, because that’s tyranny!’ That’s six weeks versus 400 years of quarantining a race of people. The policing is an issue, but it’s the least of it. We use the police as surrogates to quarantine these racial and economic inequalities so that we don’t have to deal with them.”

Stewart has — for the most part — removed himself entirely from the entertainment industry since leaving “The Daily Show” in Trevor Noah’s hands in 2015, with the exception of making a handful of appearances on pal Stephen Colbert’s “Late Show” and to be an advocate for various political causes he backs. He’s reappearing now to promote political satire “Irresistible,” a film written and directed by Stewart, which is coming out amid a pandemic and the resurgence of #BLM protests (a situation that Stewart compares to “showing up to a plane crash with a chocolate bar”).

The former Comedy Central late-night host told NYT Magazine that the killing of Floyd while in the custody of Minneapolis police officers on Memorial Day is part of a “cycle” and “in some ways, the issue is that we’re addressing the wrong problem.”

“We continue to make this about the police — the how of it. How can they police? Is it about sensitivity and de-escalation training and community policing? All that can make for a less-egregious relationship between the police and people of color. But the how isn’t as important as the why, which we never address,” Stewart said. “The police are a reflection of a society. They’re not a rogue alien organization that came down to torment the black community. They’re enforcing segregation. Segregation is legally over, but it never ended. The police are, in some respects, a border patrol, and they patrol the border between the two Americas. We have that so that the rest of us don’t have to deal with it. Then that situation erupts, and we express our shock and indignation. But if we don’t address the anguish of a people, the pain of being a people who built this country through forced labor — people say, ”I’m tired of everything being about race.” Well, imagine how [expletive] exhausting it is to live that.”

Stewart says “police brutality is an organic offshoot of the dehumanization of those power structures.”

“There are always going to be consequences of authority. When you give someone a badge and a gun, that’s going to create its own issues, and there’s no question that those issues can be addressed with greater accountability,” he added. “It can be true that you can value and admire the contribution and sacrifice that it takes to be a law-enforcement officer or an emergency medical worker in this country and yet still feel that there should be standards and accountability. Both can be true. But I still believe that the root of this problem is the society that we’ve created that contains this schism, and we don’t deal with it, because we’ve outsourced our accountability to the police.”