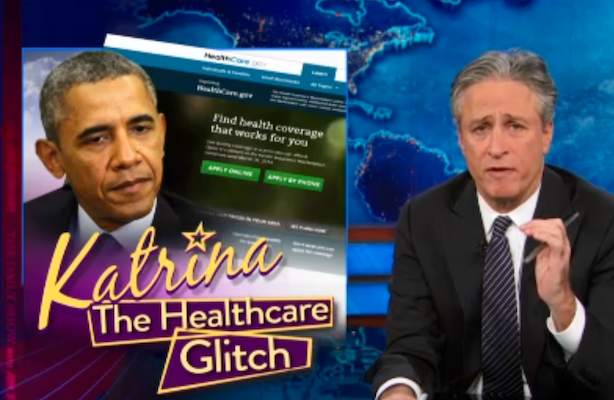 Things are looking bleak for President Barack Obama. His approval ratings keep sinking as his administration tries to fix technical glitches that have marred the online launch of his signature healthcare law.

He’s been booed in public recently and there’s even been trouble on the home front,  Jon Stewart joked on Monday’s edition of “The Daily Show.”

“He taped over his wedding video recently,” Stewart said. “He was just trying to record a very special ‘2 Broke Girls.'”

And the Obama administration’s headaches, has left the media grasping for the perfect historical comparisons to illustrate the bureaucratic disaster that is currently unfolding.

In recent days, a drumbeat has sounded among commentators that the Healthcare.gov 404 errors are the equivalent of the Bush administration’s flawed response to Hurricane Katrina.

Cut to former White House Chief of Staff Andrew Card arguing that the comparison was unfair to his old boss, President George W. Bush, because during the hurricane’s aftermath he was forced to deal with an obstructionist Louisiana governor.

“During Katrina Bush didn’t get the cooperation of the Louisiana governor, you know, like Obama gets it now,” Stewart said, before cutting to footage of the state’s current Republican governor, Bobby Jindal, vowing not to expand Medicaid or participate in Obamacare.

There was another point that media figures — particularly those on Fox News — were eager to make, Stewart noted. They argued that Katrina lasted a week, whereas the damage from Healthcare.gov could take years to clean up. “The Daily Show” host had a few problems with that time table.