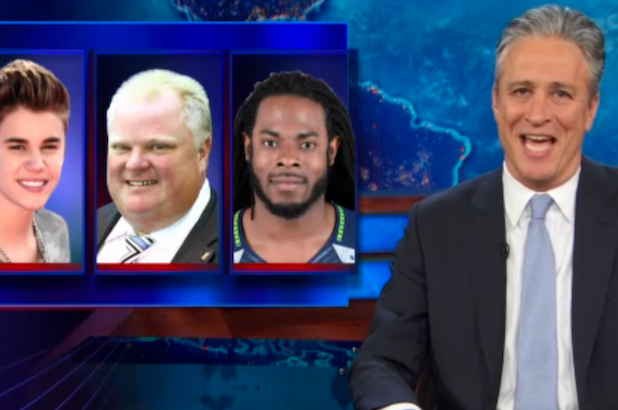 Jon Stewart wonders why the news media seems to treat two Canadians accused of violence as naughty scamps, while dismissing a Stanford-educated athlete as a “thug.”

It couldn’t have anything to do with race, could it?

Canadian Justin Bieber, already in hot water for a DUI, has been accused of assaulting a limousine driver. That’s not all. Rob Ford, the crack smoking mayor of Toronto, is now being sued for allegedly having his sister’s ex-boyfriend, Scott MacIntyre, beaten up in prison to keep him quiet about the mayor’s abuse of drugs and alcohol.

“Because if not for Scott MacIntyre, how would we ever have learned about his drug and alcohol abuse?” Stewart said. “He’s done such a good job of keeping it on what we call the DL.”

For the most part, the media is laughing it off and treating Bieber and Ford’s indiscretions as sources of merriment.

“They’re just a couple of playful scamps accused of committing major felonies,” Stewart said. “It’s not like they said things loudly in a post-game celebratory interview.”

In contrast, commentators have come down hard on Seattle Seahawks cornerback Richard Sherman for his  trash-talking rant earlier this month about San Francisco 49ers receiver Michael Crabtree. His comments that Crabtree is a “sorry receiver” came after beating the team in the NFC Championship and have left many in the media branding the African-American player a “thug.”

“Yeah, that’s right, Richard Sherman is a thug,” Stewart said. “The thugs aren’t the dudes accused of actual violent crimes, it’s the Stanford-educated cornerback who talked too loud after the game. I can’t imagine why, I just assume it’s due to some deep systemic bias against Seattle.”