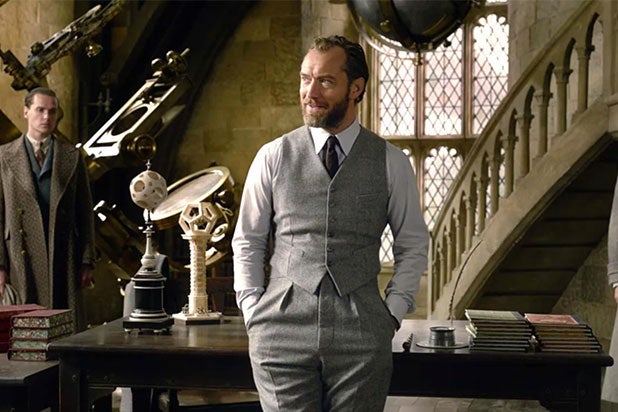 Albus Percival Wulfric Brian Dumbledore is among the most iconic and beloved characters, not only in J.K. Rowling’s “Harry Potter” book series, but in all of fantasy literature. And that some big robes to fill for Jude Law.

“It was a huge amount of responsibility,” Law said during a Q&A following an early fan screening of the new film “Fantastic Beasts: The Crimes of Grindelwald” at Universal Studios Hollywood on Saturday. “He’s a beloved Potter character. But I thought I was given a little bit of freedom to interpret him myself and I hope I stepped up.”

Law’s fellow cast mate Eddie Redmayne, who plays the film’s lead, Newt Scamander, said during the Q&A that experiencing Law’s turn as Dumbledore for the first time was next to magical.

“There was — the moment [Newt] sees Dumbledore and — it’s in the trailers — he’s on the ledge of St. Paul’s Cathedral and it starts with just Dumbledore’s back and when he turned and looked at me he somehow managed to encapsulate in one look everything that I’d always — it was that kind of gravitas, a little twinkle in the eye. It was Dumbledore right there in one look,” Redmayne said.

“That was all CGI,” Law joked. “I had a word with the guys in post production, I said up the twinkle and a little bit of gravitas.”

Law is the third actor to portray the Hogwarts Headmaster, following the likes of Richard Harris, who died after “Harry Potter and the Chamber of Secrets” was released, and Michael Gambon.

In Warner Bros.’ upcoming “Fantastic Beasts: The Crimes of Grindelwald,” Law plays a much younger version of Dumbledore, revealing secrets about one of the wizarding world’s most powerful characters — that fans of the books and movies have poured over for years.

Also Read: Jude Law Didn't Go to Wand School Before 'Fantastic Beasts 2,' So He Practiced With a Twig

Audiences meet Law’s Dumbledore in 1927, some 64 years prior to the events of “Harry Potter and the Sorcerer’s Stone.” He is Defense Against the Dark Arts Professor at Hogwarts, but still already at odds with the Ministry of Magic.

Fans of the books and films know Dumbledore to be a mysterious and secretive figure in the story, always keeping his past and how much he knows close to the the vest. “Fantastic Beasts: The Crimes of Grindelwald” launches the long-awaited journey of exploring the events in Dumbledore’s past that made him the wizard audiences fell in love with in initial “Harry Potter” franchise.

Specifically, the film pulls the curtain back a little on the relationship between Dumbledore and the dark wizard Grindelwald, leading up to his famed defeat with alchemist Nicolas Flamel.

Also Read: Who the Hell Is Nagini, the Snake Woman in 'Fantastic Beasts: The Crimes of Grindelwald'?

“It’s a defining part of his past,” Law said of Dumbledore and Grindelwald’s relationship. “Those who’ve seen the film know there’s a lot more to be revealed. But clearly this relationship was intense and intimate. It’s some 20 odd years in the past, even from this story and yet the two of them are still, well, traveling in the opposite direction, but carrying certain wounds.”

To be sure he had all the information necessary to properly fill Dumbledore’s robes, Law met with “Harry Potter” creator J.K. Rowling, who also wrote the “Fantastic Beasts: The Crimes of Grindelwald” screenplay.

The cast members who were in attendance after the screening seemed to agree Rowling even imbued Law with Dumbledore’s omniscient quality.

“Before I started it seemed the obvious thing to do and she was very generous with her time and gave me a kind of recap of, I think, everything we know from the books but with a little more detail and a little sense of where the character was going,” Law said, before Ezra Miller, who plays Credence Barebone in the film, interrupted, saying that Rowling told Law way more than she told the rest of them.

Redmayne chimed in that the rest of the cast was “spuriously jealous.”

“You’re Dumbledore, so you get to be weirdly omnipotent while we all struggle in the dark,” Miller said before Law admitted that Dumbledore is three beats ahead of everyone. “No, he’s three films ahead,” Miller joked.