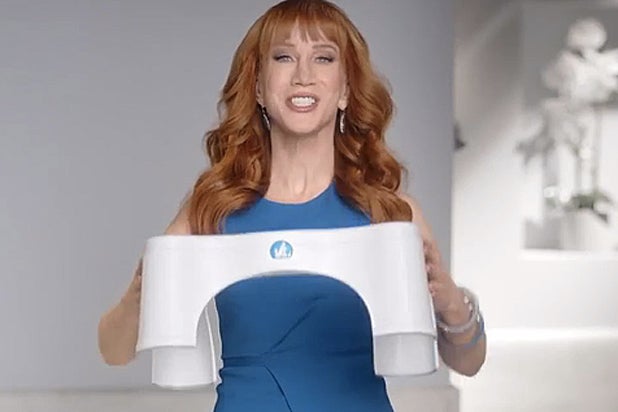 Squatty Potty, the designers and creators of Squatty Potty toilet stools and Unicorn Gold bathroom products, cut ties with the comedian on Tuesday in the wake of backlash from the bloody images.

“We were shocked and disappointed to learn about the image Ms. Griffin shared today, it was deeply inappropriate and runs contrary to the core values our company stands for,” the Utah-based company’s CEO Bobby Edwards said in a statement to TheWrap.

“In response, Squatty Potty has suspended its ad campaign featuring Ms. Griffin. We have acted swiftly and decisively to demonstrate our commitment to a culture of decency, civility, and tolerance,” the Squatty Potty chief continued.

Earlier on Tuesday, CNN released a statement regarding the actions of its frequent on-air contributor who has co-hosted the network’s New Year’s coverage with anchor Anderson Cooper in Times Square for the last decade.

“We found what she did disgusting and offensive,” a spokesperson for the network told TheWrap Tuesday night. “We are pleased to see she has apologized and asked that the photos be taken down. We are evaluating New Year’s and have made no decisions at this point.”

Anderson Cooper also tweeted his feelings on the outcry, saying: “For the record, I am appalled by the photo shoot Kathy Griffin took part in. It is clearly disgusting and completely inappropriate.”

According to the company description, Squatty Potty, LLC is a consumer products company whose product lines consist of toilet stools, sprays and other bathroom accessories. Its flagship product, the Squatty Potty stool, is designed to help users assume the squatting position while using the bathroom, delivering fast, complete elimination with comfort and ease.

In 2014, it was featured on ABC’s “Shark Tank,” and became the second most successful company in the history of the show.