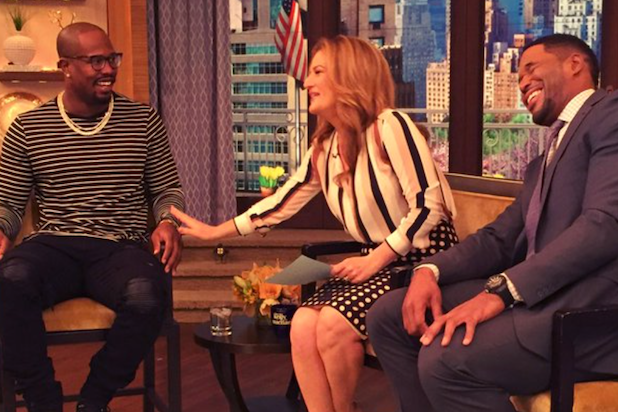 Michael Strahan formally announced on Wednesday’s “Live! with Kelly and Michael” that he’s leaving the program to move to “Good Morning America” on a full-time basis, but his co-host Kelly Ripa was not there.

Ripa, who TheWrap previously reported was left in the dark about Strahan’s decision to jump ship, was out today and Ana Gasteyer filled in.

“Kelly is off today,” Strahan said. “I’ve been in the news lately.”

The NFL Hall of Famer went on to say, “I’m leaving this show and I’m a go to ‘GMA’ full time, which is going to happen in September.”

When TheWrap reached out to “Live!” for comment on Ripa’s absence, a spokesperson simply said, “Kelly has the day off today,” without elaborating why or if it was a previously scheduled vacation day.

Strahan, a former New York Giant, is seen as a rising star at ABC, and the network hopes to exploit his growing popularity for a more high-profile show that is in the midst of an ongoing ratings battle with NBC’s “Today.” He’s been a “GMA” contributor since 2014.

“It is the same channel. I’m not going anywhere. I was reading some stuff and it sounds like I died,” Strahan said.

NY1 host Jamie Stelter took to Twitter to ask what everyone is thinking:

When will Kelly Ripa be back?