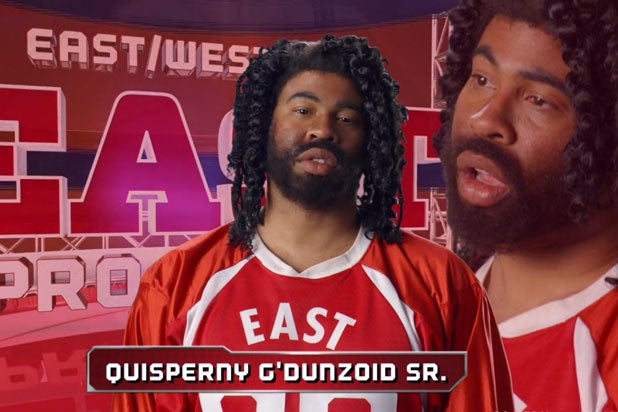 Keegan-Michael Key and Jordan Peele — a.k.a. Comedy Central’s Key & Peele — are currently the creme de la creme of the sketch comedy world. Fittingly, Peele’s first player name in the latest edition of their hilarious recurring “East/West Bowl” skit happens to be named “Creme De La Creme.” He hails from Vanderbilt University, if you were wondering.

The two comics dropped the third installment — the pro edition — of “East/West Bowl” on Wednesday, days ahead of Super Bowl XLIX. Per usual, the gag was full of ridiculous names and absurd facial hair.

This time, some real NFLers — chosen for actual names that are nigh-indistinguishable from the ones manufactured for this running gag — appeared in the video as well, including Ha Ha Clinton-Dix, D’Brickashaw Ferguson and Prince Amukamara, to name a few.

And of course there’s A.A. Ron Rodgers, out of Cal. With such a weird name and matching look, Rodgers looks like he’d be as effective pitching insurance as he would be tossing footballs.

On the fabricated end, some of our favorite made-up monikers from this version include Strunk Flugget, Grunky Peep, J.R. Junior Juniors Jr., and Busters Brownce. You can tell us your favorites in the comments section.

Joining the chameleon comedians and present-day pigskin participants were former NFLer Eric Davis and TV host/producer Michelle Marie, who navigate viewers through the viral name game, able as the straight men tasked with segueing between all the ridiculousness.