I can tell you right now, without a doubt, I will never fly Jackpot Airlines again. Not because the service was horrible, the in-flight entertainment lacking or the food inedible. It’s just that the airline doesn’t exist anymore. Well, outside of a publicity team’s mind, some pretty photos on social media and, oh yeah, Fox’s upcoming comedy “LA to Vegas.”

For the premiere of the new series, the network decided to do something completely unique: Take the show’s cast and members of the press up 30,000 feet for a special mid-flight screening of the pilot. The route? LA to Las Vegas, of course.

Also Read: 'LA to Vegas', 'The Resident' Get January Premiere Dates From Fox

I was one of several L.A.-based journalists to take part in the festivities on Thursday evening and can report that if the intent was to bring the tacky, Sin City-bound budget carrier at the center of the show to life, they succeeded wildly. And they definitely stumbled into an even better marketing plan. 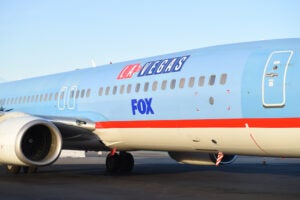 Once in the sky, we saw the first episode of “LA to Vegas” — starring McDermott as Captain Dave (basically Ron Burgundy with a pilot’s license), Matula as Ronnie (a disheartened flight attendant), and the rest of the Jackpot Airlines crew, who spend their weekends carrying some colorful frequent flyers from Burbank to Vegas and back again.

But no part of what was arguably the shortest flight I’ve ever experienced was better than the landing, which happened suddenly and before the tray tables were in their upright and locked position. I was still holding a “Tipsy Pilot” in one hand and my phone in the other, as little liquor bottles flew to the floor when the wheels came down. In real life, a trained professional had this under control — not McDermott.

As passengers disembarked, we were greeted by Matula and Graham, who put on their best fake flight attendant smiles as they told us to enjoy our stay in Vegas. Well, you guys are coming with us, so I hope we do.

From there it was a quick bus ride directly from the plane to the Bellagio (yeah, the hotel from “Ocean’s Eleven”), where we were directed to the Lily Bar & Lounge, which was dizzied up in more “LA to Vegas” decor.

Then things kinda turned into a T.I. song.

You want a screwdriver on your way in? Great, here you go! Little mushroom quiche? No? OK. Salad, pizza, ice cream and donuts. What do you want? Little meatball on a stick? No? OK. Another drink? Beer? Wine? You sure? Alright.

Rich food, richer drinks. Definitely knew I was gonna feel all that tomorrow — and I did. 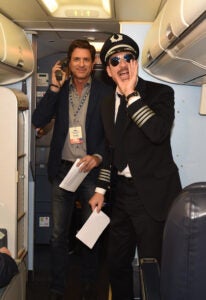 Being in Vegas less than an hour after leaving LA is a surreal experience, and wandering around a casino at 7 p.m. knowing you’ll be back in the City of Angels before bedtime is even more disorienting. That’s probably why I lost the $25 chip I was given on my first hand of roulette. Hand? Game? Actually, that’s probably more the reason I lost. Should have just played craps at the table where McDermott was riling up the crowd in character.

When the journalists had finished fielding their questions (and losing money — on Fox’s dime) and the talent was wiped, it was time to head home. But the trek back is never as pretty as the ride there is it? We stood outside in the cold for about 40 minutes while going through a pop-up airport security checkpoint before we could re-board the party plane.

Fun fact: You know who doesn’t come equipped for Vegas in December? Angelenos.

The return trip was full of the exact mix of people you’d expect to see leaving Las Vegas: Passengers in the beginning stages of a wicked hangover, sulking over the amount of money they could have won if they’d played just one more hand, or those who don’t want the party to stop just yet and ill-advisedly order another round for the flight back.

We saw the third episode of the series on the flight home, which includes a face-off between McDermott and actor Dermot Mulroney as a rival captain that is truly a clash of titans (and similarly-named actors). But I couldn’t fully appreciate it. Jet lag, perhaps?

As for the pilot? It’s pretty good, and it’s definitely better than an average airline’s entertainment selection.

Ladies and gentleman, this reporter has turned off her narration, and you may now move around the comments section.