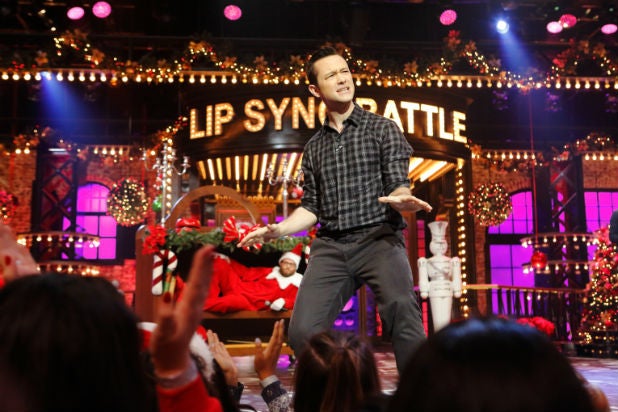 Merry Christmas and Happy Hanukkah, Spike: We all chipped in and got you 1.8 million viewers for the first ever “Lip Sync Battle” holiday special.

“The Night Before’s” Seth Rogen, Joseph Gordon-Levitt, and Anthony Mackie were joined by legendary hip-hop group Run DMC, delivering the No. 1 entertainment show on cable among adults 18-49. Also importantly, the one-hour original special’s audience was 57 percent female, something that has been a priority for Spike.

The new season of “Lip Sync Battle” debuts Jan. 7, 2016 on Spike, featuring Channing Tatum and Jenna Dewan-Tatum. The Viacom cable channel also teased that “the queen of all surprise guests” will stop by.

“Lip Sync Battle” is hosted by LL Cool J and model Chrissy Teigen. The series is the most-watched original series in network history.

The show, which began as a recurring sketch on “The Tonight Show Starring Jimmy Fallon,” is executive produced by Casey Patterson, Jay Peterson of Matador Content, John Krasinski, Stephen Merchant, and Eight Million Plus Productions.