If there is one friend you need to shout “spoiler alert!” at loudest, it’s probably Twitter. Fans of any show whose hashtag trends hard should know by now to stay away from the platform during prime time at all costs if they can’t watch an episode live. And networks are honestly cool with that.

“Our approach to Twitter is to drive conversation, support fandoms, and create a sense of tune-in urgency,” Rob Hayes, executive vice president for NBC Digital, tells TheWrap. “Live-tweeting plays a key role in meeting all those objectives. We’re directly engaging with handraisers, creating content that’s inherently sharable, and doing it in a way that creates a communal experience best enjoyed while watching live. It’s the FOMO of social.”

Don’t get us wrong, NBC doesn’t want you to find out how Jack died on “This Is Us” secondhand and ABC wouldn’t be thrilled if you discovered who didn’t get a rose on “The Bachelor” because the contestant’s name is popping up in every other tweet. So marketing teams take steps to make sure that doesn’t happen. Well, they do what they can.

“The goal is to continue to provide content that engages the live audience, but that doesn’t spoil the moment for a viewer,” Jeff Grossman, senior vice president of digital content at CBS Interactive, tells TheWrap. “We have an obligation to protect moments that show creators have designed as a surprise and we also have to be particularly careful on our reality shows. We would never announce who was eliminated from a reality show from the official show accounts but fans watching in real time will react. You can’t muzzle the real time megaphone of Twitter. It’s a balancing act.”

Then the question becomes, exactly how does a network get you live-tweeting with them? For starters, those cute little branded emojis that you see pop up when you type #Empire or #Scandal aren’t just there to be adorable. They take a lot of time and effort to create and there is a real science to them.

“When we’re planning our Twitter emojis we partner with closely with Twitter to identify the shows and the hooks that really encourage audience adoption,” Hayes said. “The ‘This Is Us’ fandom talks about crying and tissues, so we produced a tissue box. On ‘The Voice,’ fans like to share their team allegiances, so we made Coach emojis every time someone tweeted with a team hashtag.”

And then there is the live-tweeting element that fans usually care about the most: the actors and showrunners they get to interact with during the live window. While NBC, ABC, CBS and Fox all said no one is contractually obligated to live-tweet, it is definitely encouraged and usually a task they enjoy.

“Most of our talent and our creators are very supportive and understand the importance,” Megan Wahtera, Fox’s senior vice president of content marketing, tells TheWrap. “I think in this day and age they see it happening and they understand the amplifications of ‘second screen experiences,’ if you want to call it that. And some of them are just really great at it and have it come that simply. They are very natural and organic when talking with their audiences.”

“Recently, Adam Scott from ‘Ghosted,’ he engages in the live window and answers tons of questions about the show, about himself, you name it. And it actually adds another layer to the experience,” Wahtera continued. “Taraji P. Henson on ‘Empire’ — we’ve seen a correlation that when some of our significant talent tweets along with the live experience, we see an elevated lift in social conversations — so she’s another one who is great and has a strong fanbase. And somebody like Seth MacFarlane in ‘The Orville,’ it’s kind of an inside exposure that they get from him and a very unique perspective on the show. And he’s great at answering fans and tweeting in the live window. So I guess what I’m getting at is, no, it’s not a job. Ee don’t make it an obligation. But our talent is usually pretty enthusiastic about it, which goes a long way with fans.”

Also Read: 'Scandal,' 'How to Get Away With Murder' Crossovers Coming to TGIT This Season

When it comes to how shows’ official Twitter accounts engage with fans, that’s a different story — though networks seem to follow a similar format.

“Our digital strategy team watches all shows in advance and identifies storylines and key moments that we anticipate fans will respond to,” Erin Weir, ABC’s senior vice president of marketing strategy, tells TheWrap. “We then create content (memes, gifs, clips, etc.) tied to those moments so people can have assets to share and react to in real time. We also share content with our talent so that they can be an active part of the conversation. We will tease and promote on the platform, often counting down throughout the day to help drive excitement for tune in.”

Now, there are specifics for how each show is handled, but “the overall approach is the same,” Weir said.

“We want to engage the fanbase in real time with compelling information, insight, and content but naturally the tone and creative content vary greatly among our shows. We also listen to the fanbases and embrace the vernacular that they are using. So whether we are rallying the Gladiators for ‘Scandal’ or addressing Bachelor Nation, we want to create an authentic conversation.”

These strategies brought NBC 15.7 million Twitter interactions based on prime time broadcast series in 2017, ABC 14.4 million, CBS and The CW 7.5 million and Fox 6 million, according to Nielsen Social Content Ratings. But do those numbers translate to an increase in TV ratings? The Big 4 will basically tell you “no.”

“Your hair will grow gray quickly if you’re looking for a definitive correlation between Twitter and TV ratings,” Grossman said. “Television is littered with examples of Trending Topics for lower rated shows. The goal of live tweeting is about building buzz, deeper fan engagement, creating awareness and potentially recruiting new viewers down the line.”

Also Read: 'LA to Vegas', 'The Resident' Get January Premiere Dates From Fox

(The CW declined TheWrap’s request to be interviewed for this story, though its dark take on the Archie comics, “Riverdale,” was one of the top 10 most social shows on Twitter in 2017.)

Check out these stats and our infographic below to see which shows perform best across social media. 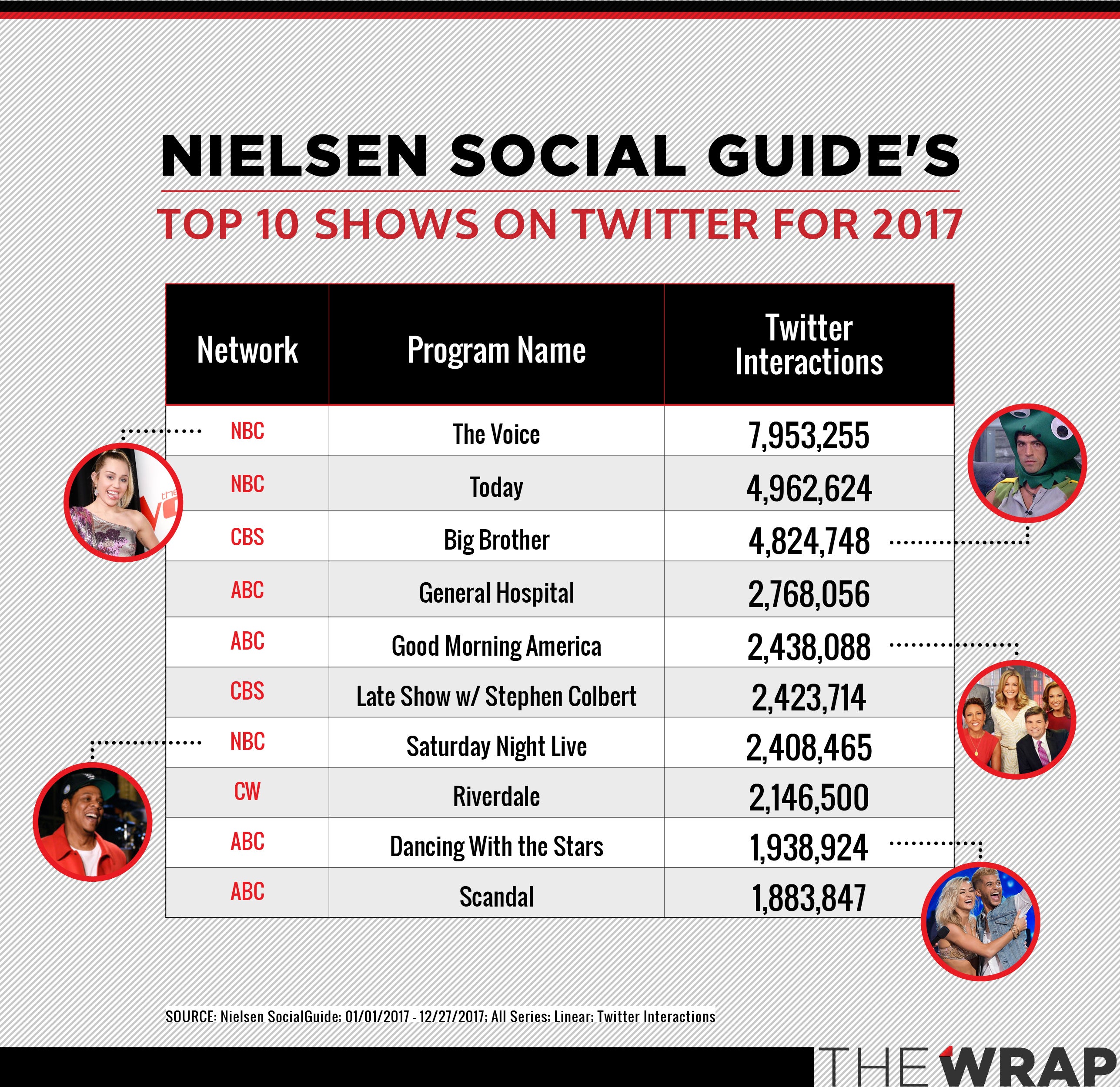