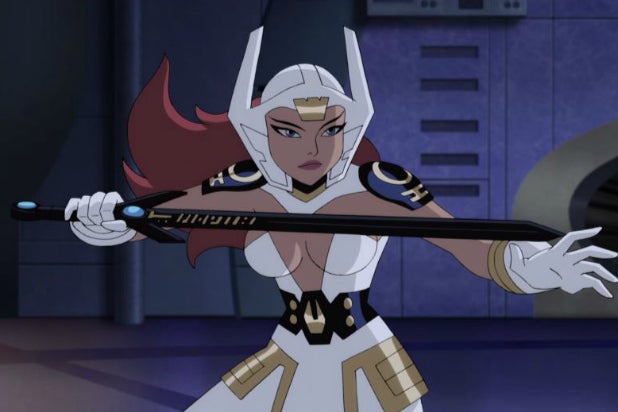 Machinima, the first global many2many programming service focused on fandom and gamer culture, unveiled its coming slate on Monday. Looking at the platform’s rundown, heroes will truly rise, as its rebranded slogan suggests.

The upcoming projects, which include a “RoboCop” reboot and three projects from the DC Comics universe (via DC Entertainment), include partnerships with Blue Ribbon Content, Metro-Goldwyn-Mayer, Clive Barker, Roberto Orci and Bunim/Murray Productions.

“Fandom and gaming engenders so much passion and engagement; it’s a cultural shift uniquely connecting with the most valuable millennials,” said Chad Gutstein, Machinima’s chief executive officer. “It’s this deep connection to our audience that has made Machinima the ninth largest video entertainment platform in the United States, and the second most-watched programmer on YouTube.”

He concluded, “With our new slate, we are reminding our fans and our clients of one very important fact: Machinima is back!”

Here’s Machinima’s programming slate, in the company’s own words:

“Justice League: Gods and Monsters Chronicles Season 2”
From visionary producer and animator Bruce Timm, “Justice League: Gods and Monsters Chronicles” turns the DC Universe upside-down. In this dark, alternate world, telling the good guys from the bad guys is never easy: Superman is not the son of Jor-El, he’s the son of General Zod; Wonder Woman is not from peaceful Themyscira, but rather the warring nation of Ares; and Batman is more vampire-bat than man…and he’s not Bruce Wayne. It is unclear if our greatest heroes are here to protect us…or to rule us. With Season 1 set to launch in June, Machinima, Blue Ribbon Content and DC Entertainment have already begun development on Season 2, a 10-episode follow-up to the initial limited series.

“DC’s Hero Project”
Machinima, Blue Ribbon Content, and DC Entertainment are setting out to discover the next great creator for the world of DC Comics. Eight contestants compete in elimination challenges to develop a live-action short video based on their own interpretations of characters from DC Comics’ “Starman” comic book series. Well-known guest judges and celebrity special guests will join bestselling writer and DC Entertainment Chief Creative Officer Geoff Johns and a panel of esteemed judges to oversee the entire competition.

“#4Hero”
A modern adaptation of DC Comics’ cult-favorite classic “Dial H For Hero,” #4Hero is a live-action, VFX-heavy action-comedy about a young woman named Nellie Tribble who is quietly desperate to make her mark on the world, but wholly unprepared to do so. Nellie stumbles upon a life-altering smartphone app that allows her to instantly become a Super Hero for a short amount of time. The problem is her super powers are dictated by whatever is trending on social media at that moment, and they are always only semi-useful.

“Clive Barker’s Creepy Pasta”
For the first time, horror legend Clive Barker is stepping away from the creatures of his own imagination and entering into the world of Internet horror fan fiction, affectionately known as Creepy Pasta. Starting with viral urban legends (e.g. Jeff the Killer, Slender Man and Ben Drowned), Clive Barker’s “Creepy Pasta” is an original series of live-action, blood-curdling short films. These new tales will be curated and adapted by Barker from submissions obtained through the creepypasta community, and produced by Machinima to scare you to your core.

“RoboCop”
“Dead or alive, you’re coming with me.” OCP’s Security Concepts Division’s RoboCop program is back in an all-new, short-form limited web series, based on Metro-Goldwyn-Mayer’s 1987 classic action film. RoboCop returns to Delta City where viewers ride along with the now standard-issue RoboCop officers as they respond to calls from dispatch. Tapping into current themes of the surveillance state, the series is shot from the first person point of view of the RoboCop officers’ heads up display, along with security cameras, dash-cams, and drones.

“Happy Wheels”
Machinima will bring audiences an all-new original animated series based on Jim Bonacci’s hit online game “Happy Wheels” and produced by BMP Digital, the digital division of Bunim/Murray Productions. This must-see 10-episode short form series, which will feature fan-favorites such as Wheelchair Guy, Irresponsible Dad and Lawnmower Man, will expand upon that has more than 8 million players a month and showcase its notorious dark humor and penchant for blood and gore. Additionally, with over 3.1 billion video views amassed, BMP Digital is looking to leverage the voiceover talents of YouTube influencers such as Toby Turner (15.2M YouTube Subscribers) and others who have made this game so iconic.

“High School 51”
Created and produced by Roberto Orci and Legion of Creatives, and starring Orlando Jones, “High School 51” is as out of this world as the name implies.

Hidden away in the heart of Area 51, Dream Lake High School is filled with mind-blowing technology, top-secret government programs and a student body that is cool, quirky, attractive, and…well, alien. No one from the outside has ever been allowed into the school and no human has ever attended…until now.

For 16-year old Alex Valencia, the first and only human ever to attend Dream Lake, high school is going to be tough. Fitting in will be one thing but his biggest challenge just might be saving the human race!

Returning Series
Additionally, Machinima is announcing the return of some of its most popular shows including “AFK,” “Chasing The Cup” (pictured above), “Realm,” “Battlefield Friends,” “Sanity Not Included,” “Deck Wars” and “ETC.”