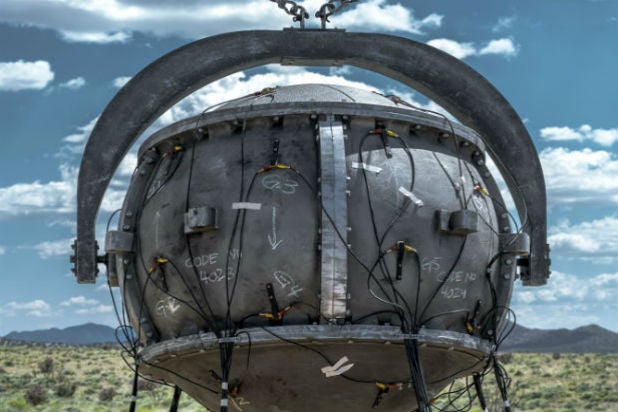 Spoiler alert! Do not read on if you are not caught up on Season 2 of “Manhattan.”

The Season 2 finale of WGN America’s “Manhattan” has been building to a moment viewers first saw teased in the first episode of the season: the test detonation of the first atomic bomb.

In the first episode of the season, viewers saw Jim Meeks (Christopher Denham) ascend the test tower to do final preparations on The Gagdet. But over the  course of the season, fans have seen Meeks become party to incredibly dangerous activities as he spies on the project for the Soviets.

“In season one we told a story about a witch hunt for imaginary spies. In this season we told a real spy story,” Shaw said. “I think the reality in Meeks’ case, like in most spy stories, is that he’s not James Bond. He’s a guy who sets off on a journey that becomes very nasty very quickly… But he’s still motivated by this great sense of morality, so in a way his soul is hanging in the balance in this final episode.”

Charlie Isaacs (Ashley Zukerman) has also undergone profound changes this season, recently suggesting that the bomb be dropped on a civilian target to maximize collateral damage.

Executive producer Thomas Schlamme says that while Charlie is not the most lovable character, he hopes fans will at least understand him.

“What’s great with what Sam and the writers did this year was in that process of sort of crossing over where it seems like the moral line should be,” Schlamme told TheWrap. “By knowing who his father was, by knowing the relationship he’s had with Abby, by understanding the love he has for his child, you understand how complicated these decisions must be for him.”

Schlamme also said that Frank Winter (John Benjamin Hickey) has been the “mouthpiece” to help convey the gravity of the events depicted in the series.

“There are moments when he says things where you’re like, ‘Holy f–k,'” Schlamme said. “He didn’t know what he  was saying at that moment, but we as an audience become profoundly aware. This was the moment of this new world order that we still are living in and thank God don’t have an ending for.”