Who is Miss Teddy? The judges are on a mission to find out during this week’s episode of “The Masked Singer.” And in a clip from Wednesday’s episode, exclusive to TheWrap, Ken Jeong thinks that one of the clues about her identity might be a personal jab at himself.

In the clip, which you can watch above, Jeong guesses that gospel singer Yolanda Adams might be inside the costume.

He’s met with a bit of skepticism from the other judges, but insists that one of the clues — a photo of Eddie Murphy — tipped him off.

“The Eddie Murphy really got me. Hear me out. Yolanda Adams saw me perform,” he begins, only to be cut off by host Nick Cannon, who brushes him off: “No she did not.” 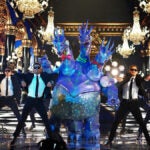 Also Read:
How Hydra Tried to Trick the Judges With Their 3-Headed ‘Masked Singer’ Costume

“She did! I swear,” Jeong continues. “I would never lie in front of a gospel singer. Yolanda Adams saw me perform at the Laugh Factory, and after my set she said, ‘You’re no Eddie Murphy.’ So I’m saying this could be Yolanda Adams.”

While it seems unlikely that the clue is a direct reference to the comedian, nothing is off the table on “The Masked Singer.” In fact, the Season 7 contestants boast a combined 112 film appearances, 15 Grammy nominations, eight Emmy nominations, seven Super Bowl performances, two Hollywood Walk of Fame stars and two World Records.

Miss Teddy is the only member of Team Cuddly left in Round 2 of “The Masked Singer.” She has received high praise from the judges, who gave her a standing ovation for her rendition of Demi Lovato’s “Tell Me You Love Me” and called it one of the best performances they’d seen on the show.

On Wednesday night, Miss Teddy will compete against Armadillo and Ringmaster for a spot in the finals. At the end of the show, only one will come out on top as the contestants face a double elimination.