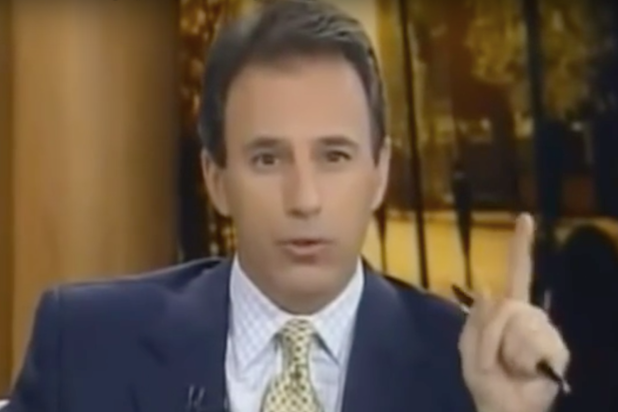 Footage of the now-disgraced former ‘Today” host reporting on September 11, 2001, with Katie Couric will remain in the museum, where it customarily plays for visitors on a continuous loop, a museum spokesperson told TheWrap.

“The footage of Matt Lauer and Katie Couric sharing the news of the September 11 attacks during their morning broadcast will remain in the museum as it is part of the historical record,” communications director Kate Monaghan Connolly said in a statement Monday.

Also Read: Matt Lauer Will Not Get Severance Pay From NBC

Lauer and Couric’s coverage of the worst terrorist attack on U.S. soil has become permanently etched into historical memory.

“We want to go live right now and show you a picture of the world trade center,” said Lauer back in 2001 during the fateful few moments. After a commercial break, Couric broke the news with a solemn Lauer sitting by her side.

“We have a breaking new story to tell you about, apparently a plane has just crashed into the World Trade Center here in New York City,” she said. “It happened just a few moments ago, apparently. We have very little information available.”

The museum’s dedication to historical accuracy is the exception that proves the rule as Lauer’s former bosses at NBC rapidly move to erase any trace of his decades at the network.

His now-infamous third floor office is currently being demolished as part of a broader renovation, a person with knowledge of the matter told TheWrap on Monday. Images of Lauer which once graced the halls of NBC will also disappear.