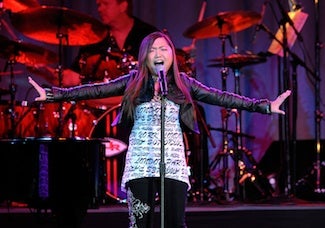 The first season of "Glee" is over, but stunt casting for the Fox smash is still very much in gear.

The first transaction of the "Glee" hot-stove league: Charice Pempengco, the 18-year-old Filipino singer whose name was bandied by her home country's press several weeks ago.

20th Century Fox Television confirmed to TheWrap on Monday that Charice was onboard for season two in a recurring role as a foreign exchange student.

Though much of her exposure came on YouTube, it was her appearance on Oprah two years ago that led to  success on the pop charts, with her self-titled debut album premiering at No. 8 on Billboard.

And here she is — your newest "Glee" castmember, singing "My Heart Will Go On":