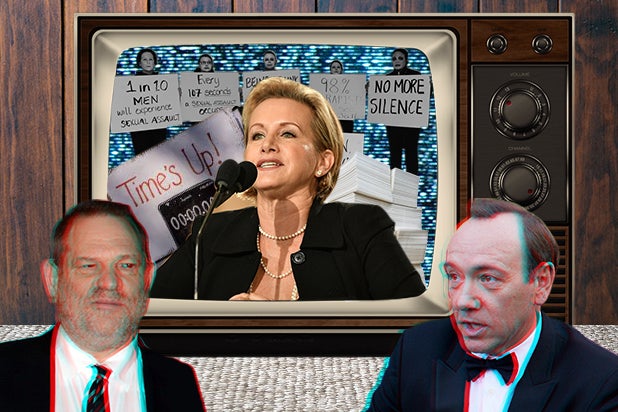 One year after the launch of the #MeToo movement with the New York Times’ and the New Yorker’s award-winning exposés of indie mogul Harvey Weinstein, Hollywood insiders say that there have been some significant changes to address sexual misconduct in the industry.

Many studios, networks and other entertainment companies have tightened contract language and increased employee training programs to prevent harassment in executive offices, on film and TV sets and even in audition rooms, executives and entertainment lawyers said.

Despite the career downfall of high-profile men such as Weinstein, CBS CEO Les Moonves and Def Jam founder Russell Simmons following multiple accusations of sexual misconduct, though, questions linger about how effective these steps have been to change Hollywood’s culture.

“The law has remained the same. What’s different is the volume of reporting is just exponentially more,” Elsa Rama, an entertainment lawyer, told TheWrap.

“More people are reporting bad behavior and employers are more sensitive to handling it and adhering to the law, whereas before our industry was probably a bit too casual about it,” she added.

And many companies are trying to get ahead of the accusation wave by educating employees about acceptable behavior with mandatory training sessions across departments. Angela Reddock-Wright, a Los Angeles attorney who specializes in sexual harassment and discrimination, estimated that the number of prevention trainings that she gives has increased 50 percent in the last year.

“In light of what’s happening, companies and studios want to make sure they are re-educating their managers and supervisors on what to do when issues of sexual harassment are reported to them,” she said.

Contracts have also come under focus in the last year. Although sexual harassment was always considered a breach of contracts, experts told TheWrap that legal language that was purposefully broad before #MeToo is now being tightened to provide clearer consequences for cases of sexual harassment and assault.

“[Many contracts] are much more specific in terms of providing a sexual harassment policy that’s curtailed to production setting, having a reporting mechanism that’s very clear, but also having the ability for grounds for termination, as well as what to do with allegations outside the workplace environment,” Rama said.

Another entertainment attorney, who asked not to be named, told TheWrap that the main differences have come at the negotiating table. Whereas agents once had more leeway to negotiate morality clauses out of contracts for talent, studios are now more likely to insist that they remain.

Moreover, the attorney said that morality clauses were previously intended to address criminal convictions and actors going to jail, but now they are getting broadened to include various forms of sexual misconduct that may not require legal outcomes.

Reddock-Wright said the effectiveness of any policy change is ultimately dependent on people’s willingness to follow it — or not. “So the real question is — if we have had laws and policies against sexual harassment in the workplace for years, why does harassment continue to happen? Why is the #MeToo movement so prevalent?” she said.

“It ultimately comes down to power — those who use their power and influence to exercise control over individuals, and to make individuals believe that if they do not succumb to their sexual propositions, they will not make it in this town,” she said. “Some use their powers for good. Others use them to take advantage of others.”

The advent of the #MeToo movement has raised general awareness of the issue — which has taken down both executives like Weinstein as well as on-camera stars like Kevin Spacey and Louis C.K.

Stars and prominent Hollywood figures like Jessica Chastain, Reese Witherspoon and Shonda Rhimes helped launch the Time’s Up initiative, a fund that aims to support employees who encounter sexual harassment and gender inequality in the workplace.

The major Hollywood guilds have also released new guidelines since last fall intended to protect their members from harassment and other abuse — though many are not legally or contractually binding. In April, SAG-AFTRA released a guideline calling on producers to refrain from holding professional meetings in hotel rooms and private residences, and urged actors to avoid high-risk locations as well.

The move came after Weinstein was accused by several women of misconduct inside hotel rooms in cities around the world, from Beverly Hills to New York to Cannes, France. (He has denied any accusation of nonconsensual sex.) These guidelines were contractually adopted by the Network Television Code in July, which SAG-AFTRA president Gabrielle Carteris described as a “real victory.”

The union is also working to develop rules that will better protect actors during on-screen nudity and sex scenes.

“There’s so much more exposure to your body and there’s more [on-screen] intimacy taking place,” Carteris told TheWrap. “Our conversations actually deal with the whole process of being a performer… and the vulnerabilities you have, and then we’re creating structures around those vulnerabilities.”

Even Carteris admits she does not know whether #MeToo advocates can make lasting change to how Hollywood does business.

“I know there’s been a shift. It’s happening in the audition room, it’s happening on set,” she told TheWrap. “We’re going to have to wait and see if it’s a sustainable shift. Kudos to those people who really recognize that there needs to be a change.”