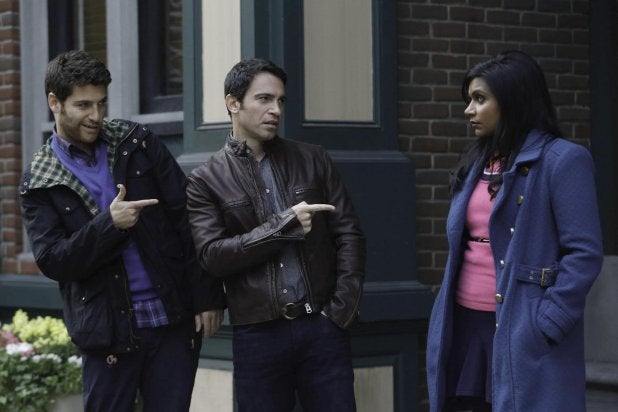 (Spoiler alert: Do not read on if you have not yet seen Tuesday’s episode of “The Mindy Project” on Fox, entitled “No More Mr. Noishe Guy.”)

“The Mindy Project” has experienced cast turnovers before, but things appeared to have finally settled down after the addition of alum Adam Pally to the cast in its second season. The show started to find its creative direction, really hitting its stride when it finally paired Mindy Kaling‘s Dr. Mindy Lahiri with Chris Messina‘s cantankerous Dr. Danny Castellano.

It looks like the creators have decided to go all in on that successful development, bringing the focus even tighter on the couple. Meanwhile, Pally was originally brought onto a floundering ship to provide another strong character in the ensemble.

But with Kaling and Messina becoming co-leads, the shift has been moving further and further away from the remainder of the cast, keeping them firmly in the supporting category. Much the way “30 Rock” became the show as it progressed, the other cast members have still had their moments, but it’s clearly been those two in the lead.

And so, Pally said goodbye on Tuesday night’s episode. But as they say, every ending is a new beginning. Kaling proved this true by pairing the farewell episode for Pally’s Dr. Peter Prentice with the surprising news that Dr. Lahiri is pregnant.

It came completely out of left field, and at the absolute wrong time for this couple … much like everything else that happens to them. Mindy is contemplating a move to Los Angeles while Danny is buying a place for them to live together in New York City.

Plus, Mindy being pregnant right now at this stage in their relationship is ridiculous, too. Which should bring plenty of laughs and drama as they try to figure out what to do — and get it all wrong before they finally get it right.