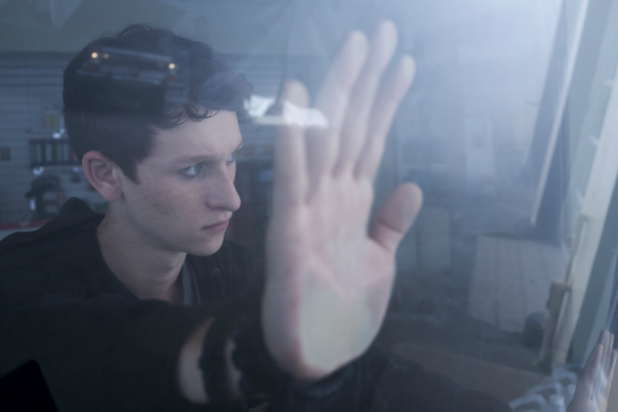 A standout character from the first episode of “The Mist” (the only episode provided to press before the season premiere) is Adrian, played by Russell Posner. In many ways he is the typical misfit high schooler. He wears eyeliner, dresses in all black, and gets bullied as soon as he walks into a party filled with jocks.

What is surprising though is his confidence. His story doesn’t revolve around coming out or growing into himself, which is typical of LGBTQ+ characters. He provides support to his friend Alex and talks like he’s been spending too much time on the internet, picking up the appropriate, eloquent language to describe himself. He gets bullied, which is another common feature of queer storylines. And he’s not just attracted to men.

Showrunner and creator Christian Torpe didn’t base the character on himself specifically, but in a phone interview with TheWrap, he said Adrian is everything he wanted to be when he was growing up.

“I don’t fall in love with gender, I fall in love with personality,” he says. Sure Adrian stares at football players and flirts with those who want to harass him, but the way he talks about his sexuality is refreshing. He knows who he is. It’s just the people around him are at odds with his way of life.

“The way he speaks about his sexuality and how aware of it he is, I certainly did not have,” Torpe explained. “I knew what I was but I didn’t have the strength to be as open and as vocal about it as he is.”

“The Mist,” like the Stephen King novella and the 2007 film adaptation, tells the story of a small town that is encased in a mysterious, thick mist. What’s more terrifying is what lives inside the mist, which is a combination of monsters and gross insects that can tear a human apart. The novella takes place inside a supermarket as people become more unhinged, while the TV show spans the entire town.

Torpe grew up in a small town in the Denmark countryside and according to him it was “very straight territory, to put it mildly.”

“The Mist” also plays into the idea of small town psychology — one of King’s favorite tropes. From his point of view, a small town is oppressive and paranoid, filled with nosy people and a general distrust of anything outside the norm.

While the show takes that from King, it also conjures up memories of growing up for Torpe. It became a core aspect of the series.

“It’s something that I personally relate to, whether it’s the sexuality or a point of view that doesn’t really fit into this mini-society,” he said.

“The Mist” attempts to tackle a lot of hot button social issues. In the first episode, a young woman gets raped and becomes the talk of the town. Another woman is immediately undermined because of her possible drug habits (it’s still unclear from just the first episode but another character calls her a druggie). This is all in addition to Adrian’s homophobia storyline.

Torpe said that in order to tap into the subject of fear and how people respond to it — something that has been inherent with “The Mist” and its adaptations — the writers created scenarios that reflected current events. Misogyny, for example, is another theme.

“There’s definitely an underlying fear of everything that’s not mainstream that drives a lot of characters throughout the show,” he explained, citing how the show is “timely” for a good reason. “It’s no secret that, look around today, people are terrified and they are looking for someone to blame and for someone to lead them to the promised land.”

Adrian is a small part in the large cast of characters. At the end of Episode 1, he’s trapped in a police station with his best friend’s dad, a mentally unstable soldier with amnesia and a lone wolf who knows too much about how to shoot a gun. It’s unclear how much he’ll have to do or if he’ll survive the upcoming onslaught, but his presence is welcome.

Correction: A version of this article misspelled the showrunner’s name.