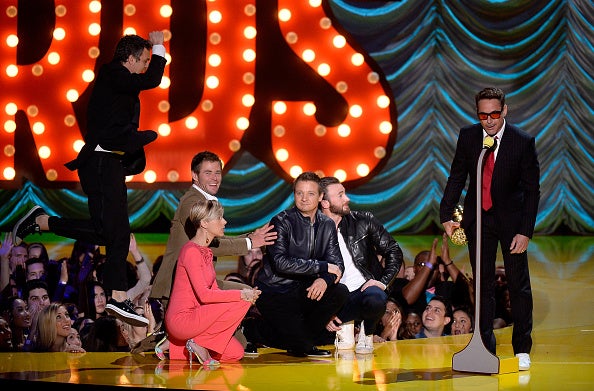 Iron Man added another kind of metal to his extensive collection on Sunday, as Robert Downey Jr. collected the MTV Movie Awards’ Generation trophy on Sunday.

The Generation award is the 23-year-old show’s answer to a lifetime achievement award, and was presented to Downey by his “Avengers: Age of Ultron” costars Scarlett Johannson, Chris Hemsworth, Chris Evans, Mark Ruffalo and Jeremy Renner.

“We should also mention that, like Tony Stark in Iron Man, he’s filthy f*cking rich,” joked Johannson before introducing a montage of the actor’s impressive credits, including “Chaplin,” “Sherlock Holmes,” “Less Than Zero” and “Shortcuts.”

Downey Jr. was revealed through a cloud of smoke, frankly something he’s used to by now, and admitted he expected the prize a lot sooner.

“When the first generation award was given in 2005, I thought simply, ‘Where’s mine?” Downey Jr. joked. “And I’ve spent 10 long years patiently awaiting to emerge from a massive, trippy cat head to receive the recognition I’ve so desired.”

Ruffalo, perhaps tired from standing, kneeled down on stage and the A-list cast quickly followed suit.

“Everyone take a knee!” Downey Jr. demanded. “I try to live honorably and never forget my love of the game and my friends… if a man is judged by the company he keeps, I must be doing something right.”

“Avengers: Age of Ultron,” the latest film in the Marvel cinematic universe, hits theaters May 1.