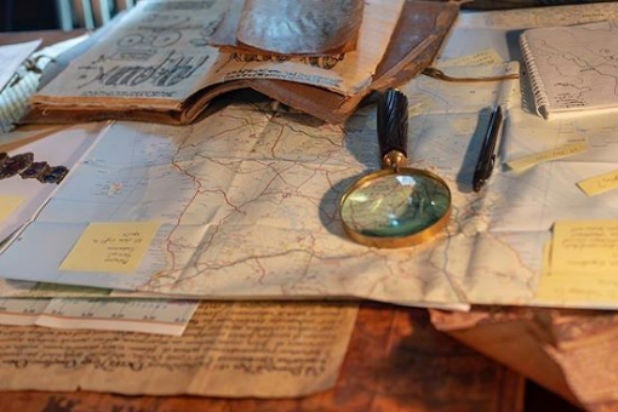 Update: It’s definitely something to do with “Uncharted.”  Fillion posted another image on his Instagram Thursday, which you can see above. More details below.

“Castle” and “Firefly” Actor Nathan Fillion made his geekiest fans flip Wednesday when he posted a clue on his social media hinting that he might be involved in something connected to the “Uncharted” video game franchise. And he did it again the next day, this time with an unmistakable reference to the series.

On Wednesday, Fillion Instagramed a photo of rapper Drake, with the caption “Sic Parvis Magna.”  That’s latin for “Greatness from small beginnings,” and it was the motto of British privateer Sir Francis Drake. But video game fans immediately recognized that it’s also the motto adopted by the main character of Developer Naughty Dog’s “Uncharted” video game series, Nathan Drake, who claims to be descended from Sir Francis.

For those unfamiliar, the “Uncharted” series follow Drake, an Indiana Jones-ish thief and treasure hunter, as he trots the globe using his considerable archaeological and historical knowledge to chase down mythical artifacts and lost cities — and usually destroy them to keep warlords from using their secrets to conquer the world.

On Thursday, Fillion followed up with another image, this one of maps and a journal, and another reference to that date. In the games, Drake keeps his treasure-hunting notes in a series of journals, and in the first game, he follows in Sir Francis Drake’s footsteps using the explorer’s journal.

So yeah, the cryptic posts are definitely related to “Uncharted,” and the date suggests some sort of announcement is coming this Monday. What, though, is the real question. Maybe a movie?

Naughty Dog has been trying to get a movie version of the franchise off the ground for a decade with little success. At one point, David O. Russell was set to direct, with Mark Wahlberg playing the role of Nate Drake, but Russell left the project around the time his film career revived with films like “Silver Linings Playbook.” The most recent attempt, announced last year, would star Tom Holland as a young version of Nate, with “Stranger Things” producer Shawn Levy attached to direct, and a script written by Joe Carnahan. Nothing more has been heard since the initial announcement however.

Also Read: 'Destiny 2': What Do the Ending and Post-Credits Scene Mean?

So, uh, is Fillion teasing a role in an “Uncharted” movie, possibly as Nate Drake himself? It’s not impossible. He’s long expressed interest in playing the character in a movie — he even lobbied half-jokingly for the part on Twitter in 2010. He’s a bit older than the character’s mid-30s age range during the first three games, though he’s just a few years older than Drake’s current canonical age of 41.

But if the film — assuming it’s a film — is the concept unveiled last year, our guess is he’d play another role, that of Nate’s mentor, Sully. Sully is Nate’s surrogate father and basically an older, lovably sleazy good time charlie who reluctantly follows Nate around even as his increasing age makes it kind of tough.

Another possibility: Fillion is teasing a role in an upcoming “Uncharted” video game. That would be big news for fans as well. Naughty Dog hasn’t announced any new games in the series since its last two releases: “Uncharted 4: A Thief’s End,” and “Uncharted: The Lost Legacy.” The former marked the end of Nate Drake’s story in the series, according to Naughty Dog; the latter, a side-story, starred various characters who had appeared in the other games, including Nate’s brother Sam Drake, but not Nate himself.