We’re only a few days into the Rio Olympics and Al Trautwig has already had to make a public apology.

The NBC announcer said Monday that he regretted tweeting that the adoptive mother and father of American gymnastics star Simone Biles are not her parents.

“I regret that I wasn’t more clear in my wording on the air,” he said in a carefully-worded statement via by NBC Sports, the Chicago Tribune reported. “I compounded the error on Twitter, which I quickly corrected. To set the record straight, Ron and Nellie are Simone’s parents.”

Also Read: 'Pokemon Go' Gets Released in Brazil Just in Time for the Olympics

Trautwig’s humble apology came after he tweeted, “They may be mom and dad but they are not her parents,” during Biles’ routine in response to a Twitter user who wrote: “Stop calling her PARENTS her grandfather and his wife. A. Nelly is more important than his wife. B. THEY ARE HER PARENTS.”

Earlier Sunday evening, Trautwig said on the air that Biles “was raised by her grandfather and his wife and she calls them mom and dad.”

Ron and Nellie Biles adopted Simone and her younger sister, Adria, in 2001. The girls had spent time in foster care as Shanon Biles, their biological mother and Ron’s daughter, struggled with drugs and alcohol.

NBC later ordered Trautwig to delete the offending tweet, but not before it was captured by USA Today in the screen grab below. 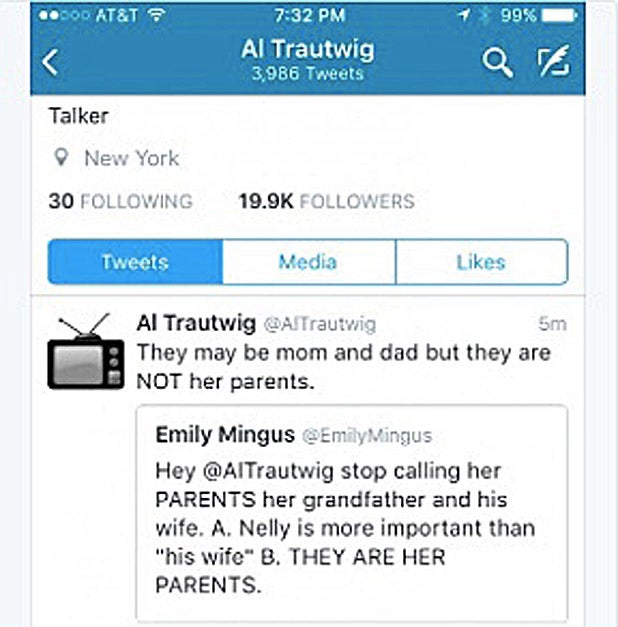 “We became aware of the situation last night and addressed it with Al quickly,” NBC said in a statement.

Nicknamed “the Michael Jordan of gymnastics,” three-time world champion Biles is poised to become one of the brightest stars of the Rio Games. As her star has grown over the past three years, the teenager has often shared the story of how her family came together.

In December she told USA Today, “When I was younger, I was adopted by my grandparents, which are now my parents. I call them Mom and Dad. Everything’s just been so normal.”

Shanon Biles is her biological mother, she repeatedly stresses. Nellie Biles is Mom.