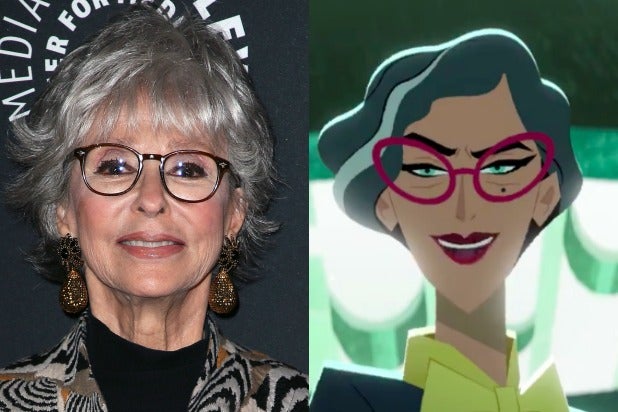 The original Carmen Sandiego has some advice for the next generation: step it up.

And new character the “One Day at a Time” star is playing is not exactly thrilled with how Carmen’s living her life of crime.

“Young lady, you seem like a smart cookie,” Moreno’s character says in the short clip, tweeted by Netflix on Thursday. “If you wish to walk in my shoes someday set your sights higher than pulling pranks or picking pockets. White collar crime is where the real money is.”

“Thank you for the career advice, I will take it to heart,” Rodriguez’s character says.

“Arrivederci!” Moreno says as she walks off.

Here’s the official logline for the animated series, which also includes the vocal talent of “Stranger Things” star Finn Wolfhard: A master thief who uses her skills for good, Carmen Sandiego travels the world foiling V.I.L.E.’s evil plans — with help from her savvy sidekicks.

The 9-episode first season launches Friday and will be followed by a live-action film version of “Carmen Sandiego” on Netflix that also stars Rodriguez.

“Carmen Sandiego” first began in 1985 as a series of educational computer games titled “Where in the World Is Carmen Sandiego?” before rising in popularity in the 1990s with a pair of PBS game shows and an animated series.

In anticipation of Netflix’s “Carmen Sandiego” launch, an interactive experience has been set up at TheCarmenEffect.com that will give readers a look into the iconic character’s incredible influence over the years.

Watch the clip featuring Moreno below.

The iconic @TheRitaMoreno (and former voice of Carmen Sandiego) returns in Netflix's new incarnation of #CarmenSandiego to pass the baton — or, rather, the red fedora — to @HereIsGina! WATCH: pic.twitter.com/RURQBIDv1L