DC Comics fans got a little surprise on Sunday when the Instagram account for the upcoming movie “Joker” posted a half-dozen short videos with a strange message inside.

The clips were largely from the first trailer and included Joaquin Phoenix parading around in his full Joker makeup and regalia, his pre-Joker self climbing into the fridge in despair, and Robert De Niro playing a late night comedy host in a nod to Jerry Lewis’ role in “King of Comedy.”

In each clip, there’s a single frame of what appears to be white scratches akin to damaged film. When placed together, the scratches form a message that reveals that a new trailer for “Joker” will be released this Wednesday.

Check out the clips below, and pay close attention to the quick flashes in each one.

When captured in screen grabs and pieced together, this is what you get: 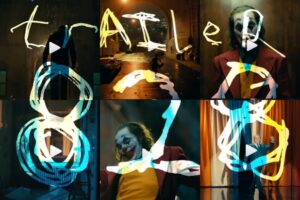 Directed by Todd Phillips, “Joker” puts a new spin on the origin story of Batman’s most infamous nemesis. Phoenix plays Arthur Fleck, a failed stand-up comedian barely making ends meet while taking care of his ailing mother (Frances Conroy). The dirty world of Gotham City continues to beat down and break Arthur until he decides the only way to change his life is to put on a happy face as the Clown Prince of Crime.

14 Movie Villains With Facial Scars, From The Joker to Kylo Ren (Photos)

The British Film Institute recently announced that it would no longer be funding movies that feature villains who have facial scars, burns or disfigurements. It's in support of a charity campaign called #IAmNotYourVillain, which wants to change the stigma that people with facial differences should be seen as ugly, wrong, unnatural, or in the case of many films, evil. It's a negative representation that shows up more often than you think among movie villains because it's an easy visual way of showing that a character is different or menacing. Here are some famous examples that use this trope.