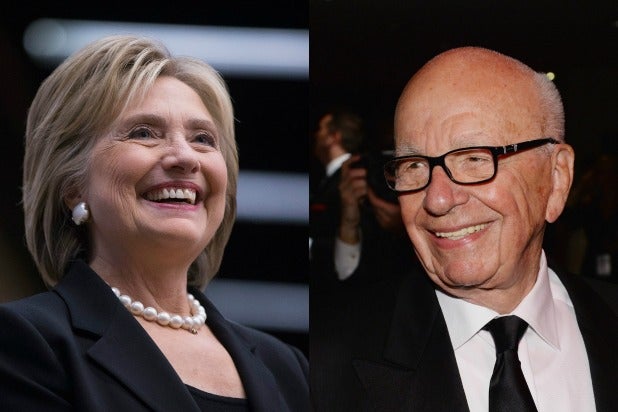 It was a headline made for clicking.

It turns out neither Clooney nor Murdoch plan to be at the event. Asked if Clooney will be attending the London gala, his longtime publicist, Stan Rosenfield, told TheWrap via email, “Hard to do since he is in L.A. tonight.” Murdoch’s reps told us, “The story is incorrect; he is not attending the fundraiser.”

But the idea of Murdoch attending a Clinton fundraiser is not as wild as you might think.

Murdoch threw his own fundraiser for then-Sen. Clinton’s reelection campaign in 2006, even after his tabloid, the New York Post, “savaged Hillary Clinton’s initial aspirations to become a US senator for New York,” according to The Financial Times.

And U.K’s  The Guardian reported in 2007 that Murdoch donated $2,300 to Clinton’s presidential campaign.

In 2014, Murdoch raised more than a few eyebrows when he told Fortune magazine he “could live with Hillary as president,” adding, “We have to live with who we get. We don’t have any choice.”

When pressed by the reporter whether he could ever support Clinton, Murdoch didn’t yell or even laugh. Instead, he said, “It would depend on the Republican candidate totally.”

So how did this happen?

The Financial Times quoted one unnamed source who described their relationship like this: “They have a respectful and cordial relationship. He has respect for the work she has done on behalf of New York. I wouldn’t say it was illustrative of a close ongoing relationship. It is not like they are dining out together.”