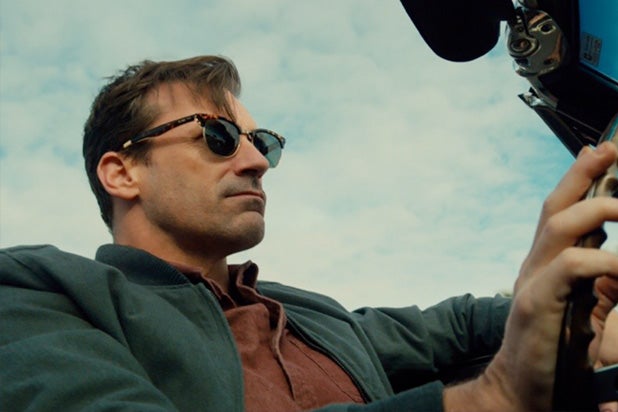 Hating on a movie like veteran director Mark Pellington’s “Nostalgia” costs you something. It’s an achingly sincere, Proustian mosaic about grief and memory, co-written and directed by a bereaved filmmaker as a therapeutic exercise. (Pellington’s wife died suddenly in 2004, leaving him to raise their then 2-year-old daughter alone.)

The film is low key and very slow, but there’s a quiet missionary zeal at work: a fervid desire to impart Big Truths about the human predicament by preaching personal epiphanies, traumatically acquired.

“Nostalgia” means well. It tries hard. It wants to help. And there’s nothing at all pleasurable in stomping on this particular butterfly, so painfully assembled from shards of personal loss. But just as you can feel compassion for the grief-struck friend who finds God, or who self-medicates, or suffers a breakdown, without becoming an atheist alcoholic in a straitjacket, it’s quite possible to watch this tone poem to mourning with the fullest empathy while finding its central message a little unsound and a lot unwise.

This is a movie about the props people leave behind when they exit the stage of life, the bric-a-brac in the attic and on the shelf, which Pellington sees as a kennel full of spirit animals embodying those who have gone. “Nostalgia” begins with what might be its best scene: a freckled waitress (Shinelle Azoroh) reacts to an off-screen customer who queries her about her jewelry.

Each piece is a family heirloom with a story behind it, so we get to know this woman we’ll never see again through her objects, in an easy and offhand manner the rest of the film won’t even aspire to. As an overture, it sets an intriguing tone. But then we meet the customer himself (John Ortiz, “Silver Linings Playbook”) and things start to drift and go wrong.

Ortiz plays either an estate appraiser or an insurance claims adjuster; in the space of two sequences he seems to serve both these related but distinct functions. He stops in on Bruce Dern, a crusty widower whose family wants him to simplify. Dern is irascible, Ortiz quietly intense — a traveling angel whose unblinking interest in the old man’s personal artifacts is supposed to be compassionate but carries an unintended aura of creepy voyeurism. He takes Dern’s picture and later superimposes it on a youthful portrait of Dern he surreptitiously photographed, a gesture meant as soulful but instead feels disturbingly intrusive.

Ortiz meets with Dern’s daughter (Amber Tamblyn, in a nuanced cameo) for some pieties about his vocation bearing witness to other people’s lives. Then he’s off to the next plotline, about an elderly widow (Ellen Burstyn) whose house has burned down. (Ortiz takes a moment when no one’s watching to perform a “Honey, I’m home” pantomime in the ashes, a “heartwarming” gesture that feels like an outtake from “The Stepfather” or “Strangers on a Train.”)

It’s in the ruins of Burstyn’s home that we begin to notice how pseudo-poetry of the dialogue by Pellington and co-writer Alex Ross Perry (“Listen Up Philip”). The legendary Burstyn struggles through thankless speeches about losing her past, jousting with what amounts to blank verse and narrowly wrestling her lines to a draw.

The only survivor of the blaze is a valuable autographed baseball bequeathed by the widow’s late husband, and times are pretty hard. So Burstyn is off to Vegas to meet a memorabilia dealer (Jon Hamm) whom she’ll regale with more speechifying about the totemic power of objects as the next story in what turns out to be an anthology movie is introduced.

Hamm, an extraordinarily subtle actor whose quiet craft often gets overlooked, is perfectly cast for the tone Pellington wants to strike, and he’s able to emote convincingly in the narrow elegiac range in which “Nostalgia” tries to operate. Even better is Catherine Keener as Hamm’s more energized sister. As happens in a movie arranged around a thesis, Hamm and Keener are also called on to bury their past by emptying their childhood home of its furnishings. But fate has a dark twist in store, one best left unspoiled since it provides the only narrative tension in an otherwise willfully monochromatic work.

Give Pellington points for taking a deeply materialistic approach to a spiritual topic, because “Nostalgia” quite seriously argues for the healing power of estate planning. There are characters (including Hamm’s) who question the wisdom of filling their cars and spare bedrooms with the Hummel figurines, outdated appliances and “Best Dad in the World” coffee mugs of their nearest and dearest, but “Nostalgia” converts them or punishes their lack of wisdom in every case. In the real world, many people react to personal loss by lightening their load and simplifying, an ethereal position the heirloom-driven “Nostalgia” sees as ill-considered and wrong.

If you disagree with Pellington’s main metaphysical point, the whole movie can feel like a put-up job. There’s a scene, for example, where James LeGros makes a speech to Hamm about how perishable memory has become in a digital age, where a teenager’s entire photographic history can vanish in an instant if she loses her computer and phone.

Apparently Hamm and LeGros have never heard of social media, where the average teen’s every meal, night out and camping trip is chronicled across friends’ profiles in greater detail than Boswell gave to his “Life of Samuel Johnson.” It’s a straw-man argument, and a fusty old-guy one at that.