I just got through moderating a panel of the film’s key leaders at the National Association of Broadcasters, and one thing is clear: You really don’t need a blockbuster budget these days to make a first-class effects film. You just need really, really smart people. 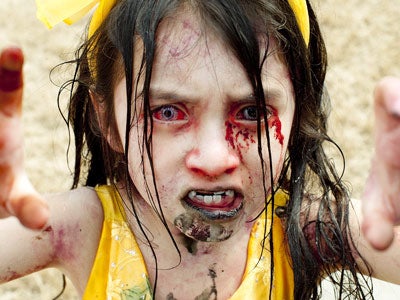 The panel, produced in association with Film Independent (they of the Indie Spirit Awards) was called “Big Idea, Small Budget: ‘Zombieland’s’ Production Innovations.” To hear them tell it, those innovations came in two principal ways: Through detailed planning and, when that plan occasionally would fall apart, to be willing to punt.

Now don’t get me wrong; $22 million is hardly a schlocky number to start with. But even a number like that has its confines – enough so that director Ruben Fleischer, production designer Maher Ahmad and visual effects supervisor and producer Paul Linden had to stay nimble, know their limitations, and dump ideas that weren’t working.

Oh, and they also had to deal with a lot of digital blood.

Turns out, getting zombies to spew gallons of goop — or make a good splat when slammed with a shotgun shell — is a lot tougher (and more expensive) to do in front of a camera. Getting a squib to fire a packet of blood at the precise moment when Woody Harrelson’s firearm kicks his shoulder back is no easy feat. Do it after-the-fact, and you don’t have to re-rig the effect six, seven or eight times while the crew sits around on the clock.

So the decision was made early on: Nearly all the blood spilled in “Zombieland” (and trust me, there’s a lot) didn’t appear until it was rendered there. Along the way, they learned a few things about pixillated blood that they’ll undoubtedly carry into future projects.

Give these guys credit: They pulled back the curtain on a lot of cost-saving measures and, judging by the stylish/cool look of the movie and the highly positive critical reaction to it (89 percent fresh on Rotten Tomatoes), they pulled it off.

And it’s not always about defaulting to digital; in fact, it’s often the opposite. An example: Given the sparse amusement park they found (almost the entire film was done in Georgia — to take advantage of generous tax breaks, of course) in which to shoot their final, climactic scene, Ahmad had some filling to do. Six Flags this was not.

But rather than using expensive trucked-in rides or CG, he draped a scissor tower in black cloth, strung some lights around it like a Maypole, and voila! Another ride. Etc.

You do what you have to do.

Another thing they learned: Animate the action sequences in exquisite detail before the production trucks ever roll out of the garage. Fleischer showed a 15 second sequence done in unimaginably bad computer animation (think Dire Straits’ "Money for Nothing" video) that acted like a storyboard; by the time they had to shoot the intricately coordinated action scene, they had already worked out all the problems with it.

"It was like tracing by the time we put the scene together," Linden said.

Ultimately, the “Zombieland” guys agreed that they made the movie they wanted to make (and stayed something like $120 under budget; hey, every penny counts these days) by cutting corners without cutting production value.