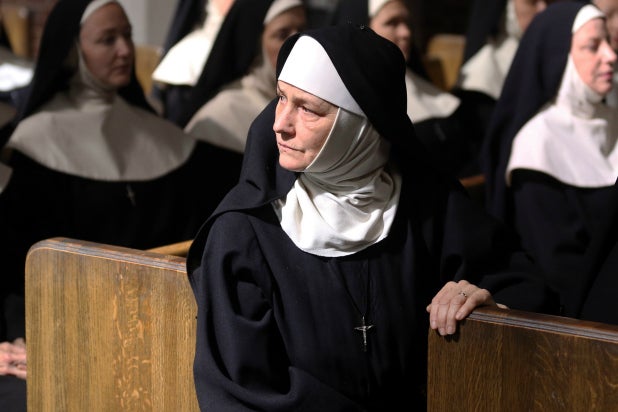 By the late 1960s, following the Second Vatican Council reforms, thousands of nuns had left their orders. What prompted this exodus? It’s a fascinating question, and when “Novitiate” retains its focus, it ventures towards some interesting answers.

Writer-director Maggie Betts (who made the documentary “The Carrier”) does sometimes wander too far afield in her feature debut. Fortunately, a steel-spined Melissa Leo is always ready to wrench us back in.

Leo plays Reverend Mother, the utterly unyielding leader of the strict Roman Catholic Order of the Sisters of Blessed Rose. It is 1964, and a new group of girls has just arrived at her Tennessee convent, hoping to dedicate their lives to worship and religious servitude.

Helping these young women as they move from the postulant to the novitiate stage in their instruction is Sister Mary Grace (Dianna Agron, “Glee”). She barely seems older than they are, and secretly shares many of their doubts. The girls, including Sister Emily (Liana Liberato, “Trust,”) and Sister Sissy (Maddie Hasson, “Twisted”), are still teens who like teasing each other, giggling at silly mistakes, and even whispering about boys.

Sister Cathleen (Margaret Qualley, “The Leftovers”) stands out in her aspirations towards the strictest definition of sacrifice. Her liberal single mother (Julianne Nicholson) is horrified by this seemingly impetuous decision to cut herself off from the outside world, but Sister Cathleen sees it differently. She feels fully invested and ready to surrender to a greater devotion.

Leo mines greater depths in the less obvious, and thus more interesting, themes: subjective interpretation of supreme law, personal motivations within communal commitments, and the place of women in what turns out to be, ultimately, a man’s world. Most of all, how many sacrifices does true faith require? And are they all even humanly possible?

Also Read: Sean Spicer Finally Got to Meet Pope Francis, No Thanks to Trump

The Reverend Mother righteously preaches against pride and towards humility. And yet when Vatican II suddenly alters the status of nuns, she feels both stunned and betrayed to find herself powerless. There’s a particularly satisfying scene with Denis O’Hare’s archbishop, in which the convent’s normally fearsome leader is furious to find herself forced into the subservient position she requires of others.

Who is this woman, really? That’s the question Leo encourages us to ask, because she’s fully committed to playing a complicated human being. As is often the case, she skirts exaggeration without ever quite tipping over the edge. Just when we start to think of her character as an obvious archetype, Leo’s face flashes with an unexpected emotion that throws all our assumptions into doubt.

The younger castmates, alas, are not allowed the same freedom. Instead, they are primarily shot as representatives of a carefully-conceived concept: unspoilt beauty, youthful confusion, innocent sexuality. The setting, too, feels fastidiously styled, with rows of perfectly-matched nuns walking through the sun-streaked cloister grounds in striking silence. It all looks lovely, but keeps us at a distance.

To some degree, Qualley (whose mother is Andie MacDowell) overcomes the distraction of the camera’s evident adoration. Much of the film is seen through her eyes, and she does imbue Sister Cathleen with a touching sense of longing. Cathleen is willing to give up everything, including her very self, to gain the Heavenly love she needs. Is that insane, as her agnostic mother believes? Or admirable, as Reverend Mother assures her?

The answer may be clear to viewers, based on their own beliefs. The penance, the silence, the self-abnegation that the novitiates endure, and in some cases even welcome, is undeniably extreme. What Betts seems more interested in is whether these sacrificial rituals are arbitrary or, if not, what they truly represent.

To her credit, she never approaches these questions with any judgment, a welcome rarity in films about religion. Indeed, she’s gathered many of the elements required for further enlightenment. It’s just that, in the end, her approach proves too conventional.

Pope Francis called for compassion toward divorced Catholics on Friday