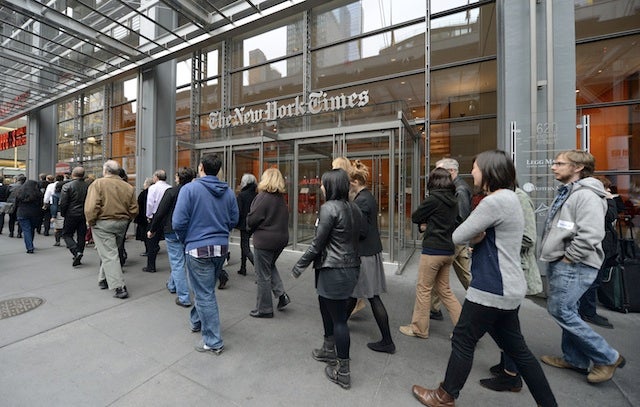 The New York Times shuffled its top editors Monday and said buyouts had saved the paper enough money to avoid a sweeping round of layoffs.

In a memo to the employees, executive editor Jill Abramson said recent layoffs were kept to a minimum, but did not say which or how many employees were pink-slipped. Times spokeswoman Eileen Murphy told TheWrap said the company laid off a "very limited number" of employees, and declined to release numbers.''

Abramson said in her memo that the buyouts cost the Times some of its top talent. Most of the exiting staffers had been previously named, but Abramson said Monday that deputy managing editor William E. Schmidt was also leaving.

Among the promotions, former business editor Larry Ingrassia was named assistant managing editor of new initiatives, which will include a big international expansion. Last year, the Times started versions of its site in Mandarin and Portuguese in an effort to tap into growing Chinese and Brazilian audiences.

Culture editor Jonathan Landman announced on Jan. 2 that he had accepted a buyout. Abramson said she would announce the new culture editor in the next two weeks.

"In the coming days and weeks we will have time to pause and express our affection and boundless gratitude for our departing colleagues," Abramson said in the memo. "Some of the longest-serving leaders in the newsroom are leaving, people who have given the Times so much of themselves and are responsible for so much of our excellence."

Abramson said in early December that she needed 30 non-unionized managers to accept buyouts or the company would face layoffs. The company also invited employees represented by the New York Newspaper Guild to volunteer for buyout packages.

Here's the full text of the memo, via the New York Times:

I wanted to let you know quickly that we are through the process of offering voluntary buyouts and cutting staff. In the end, we had to lay off far fewer people than we anticipated, having achieved most of our savings through the voluntary process.

We will continue to reposition ourselves, to meet the challenges of remaking ourselves for the digital age. The changes under way are part of the journey that we’ve been on for years: integrating our print and digital operations, expanding our reporting, deepening our ways of telling stories, innovating in ways that make our journalism the literal envy of our profession and the joy of our readers.

This means that some colleagues are changing roles. Rick Berke will now focus on video as it becomes an even bigger part of our news report. Glenn Kramon will steer our technology coverage when it is at the heart of how the world turns. These are urgent assignments requiring leaders who know the full panoply of what the newsroom is capable of doing.

We will be naming a new culture editor in the next two weeks. Jason Stallman will be our new sports editor.

Our operational needs will continue to be handled by those on the masthead, which will now include some new names. Larry Ingrassia will be the assistant managing editor for new initiatives. In this role he will spearhead our many new ventures and revenue projects. There are several already in the works, including our expansion of international coverage.

Janet Elder will be assistant managing editor for newsroom administration. She will oversee newsroom resources, including managing our budget and dealing with compensation, staffing, career development and training.

Ian Fisher will be assistant managing editor for content operations. He will manage the deepening integration of our digital and print news reports, working closely with interactive news, engagement, mobile and technology.

In the coming days and weeks we will have time to pause and express our affection and boundless gratitude for our departing colleagues. Some of the longest-serving leaders in the newsroom are leaving, people who have given The Times so much of themselves and are responsible for so much of our excellence. Among them is John Geddes, whose smarts, ability to seamlessly get us through all manner of crises from hurricanes to blackouts and of course his ability to make us laugh at ourselves, will be sorely missed. Jon Landman is leaving too. He epitomizes the integrity and ingenuity of this place. Bill Schmidt, whose charm and grace symbolize the fundamental humanity of our newsroom, is planning to leave as well.

The very tread of Jim Roberts’s cowboy boots means: “We have this covered.” He will be moving on, as will Joe Sexton, fresh off the glory of the Avalanche project

But just as these inspiring leaders stood on the shoulders of those who came before, we are shored up by the accomplishments of our departing colleagues and challenged to reach even higher. As we start a new chapter, we are more resolved in our purpose and more committed to our standards.

Let us settle into this new world order. Then fire away with questions and criticisms.

Thanks to all of you for your patience.