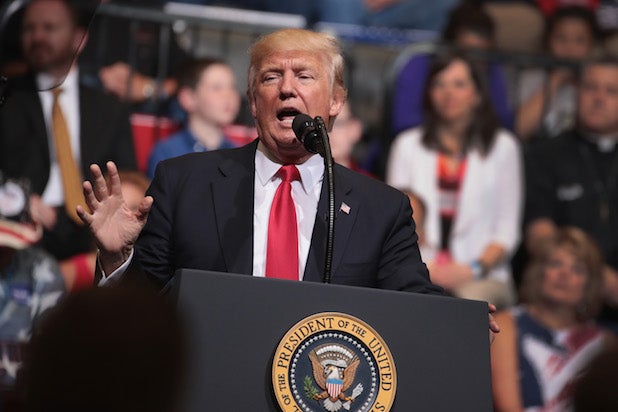 An opinion piece by the New York Times is making some noise on Twitter and for good reason.

The op-ed simply titled “Trump’s Lies” is a comprehensive compilation of the president’s greatest hits since the day he took office — each fib accompanied with the reason the paper of record believed it to be a falsehood.

“There is simply no precedent for an American president to spend so much time telling untruths,” the NY Times argued. “Every president has shaded the truth or told occasional whoppers. No other president — of either party — has behaved as Trump is behaving. He is trying to create an atmosphere in which reality is irrelevant.”

The only fabrications the paper left out are what it called “dubious statements,” like the claim that his travel ban is “similar” to the Obama administration policy.

“Some people may still take issue with this standard, arguing that the president wasn’t speaking literally,” the paper went on to say in its editorial. “But we believe his long pattern of using untruths to serve his purposes, as a businessman and politician, means that his statements are not simply careless errors.”

The paper has no qualms about calling the president out, insisting on using the word “lie” deliberately.

“Not every falsehood is deliberate on Trump’s part,” the editorial said. “But it would be the height of naïveté to imagine he is merely making honest mistakes. He is lying.”

So just how many lies did the president tell? Well… this should give you an idea:

“The list above uses the conservative standard of demonstrably false statements. By that standard, Trump told a public lie on at least 20 of his first 40 days as president. But based on a broader standard — one that includes his many misleading statements (like exaggerating military spending in the Middle East) — Trump achieved something remarkable: He said something untrue, in public, every day for the first 40 days of his presidency. The streak didn’t end until March 1.”

Some of the lies came complete with graphics… like this one which, as the Times notes, changed over time… See? 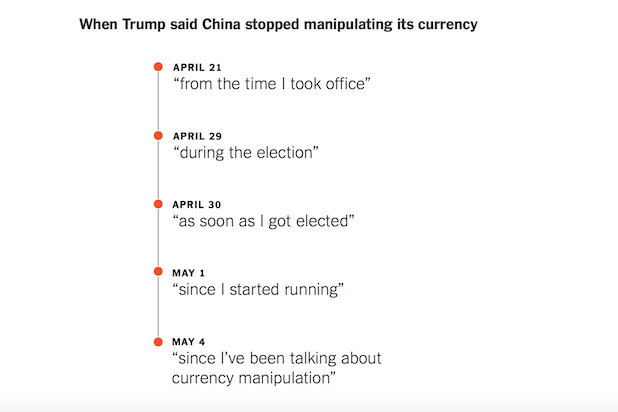 The piece can be read in its entirety here.

The list quickly made the rounds on social media, becoming a Friday trending topic.

“Good Lord,” tweeted historian Kevin Kruse. There are so many, I nearly sprained my thumb scrolling to the end of the list.”

Attorney Lisa Bloom, who represents Kathy Griffin, tweeted: “Facts do not matter to Trump. He hates the media because it fact checks. And here’s a blockbuster fact check.”

Good Lord. There are so many, I nearly sprained my thumb scrolling to the end of the list. https://t.co/LTTIE0F4Ln

Trump is a pathological liar, not a logical liar https://t.co/iJgqASREwW

Facts do not matter to Trump. He hates the media because it fact checks. And here's a blockbuster fact check. https://t.co/v5ealtVZ1h

Absolutely cannot believe that ANYONE still supports our Liar in Chief. List of tRump lies: https://t.co/a0diDn3UVG

It's funnier if you read all the parentheticals in Ron Howard voice. https://t.co/FPU8DDIXHw

This is the list that never ends, it just goes on and on my friends #resist https://t.co/bR0ZUONnAg

I love this. Wish I'd thought of it. https://t.co/hxLqL8ggV3