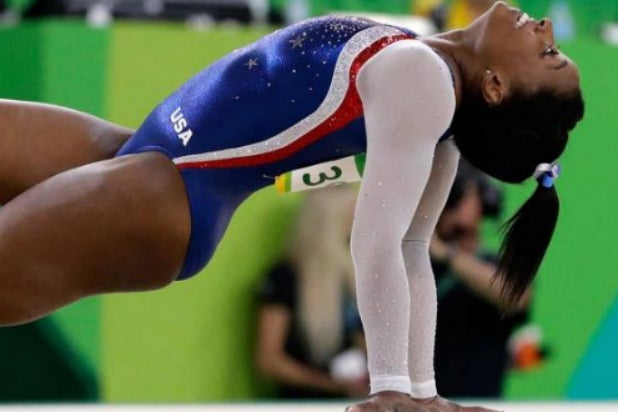 The gold medalist’s impressive achievement was revealed on “SportsCenter: Coast to Coast” by host Cari Champion, and the gymnast will also grace the cover of ESPN The Magazine’s upcoming year-end issue.

2016 was an impressive year for Biles, 19, as she won her fourth consecutive gymnastics all-around national title, brought home five Olympic medals from Rio — including golds in the Team and the All-Around competitions — and published a memoir.

“Simone Biles had a year like no other and made an indelible mark on the sports and cultural landscapes that went far beyond gymnastics,” Alison Overholt, editor-in-chief of espnW and ESPN The Magazine, said in a statement. “We’re proud to celebrate her achievements and those of all the incredible women who made the list.”

Each honoree had an essay written about them for espnW from friends, family members or those whose lives they impacted. Famous essayists include Prince Harry, Billie Jean King and Michael Phelps.

“The heartfelt essays contributed to honor this year’s IMPACT25 demonstrate how much these women altered the tenor of the conversation around women in sports and ignited our imaginations in 2016,” Overholt continued.