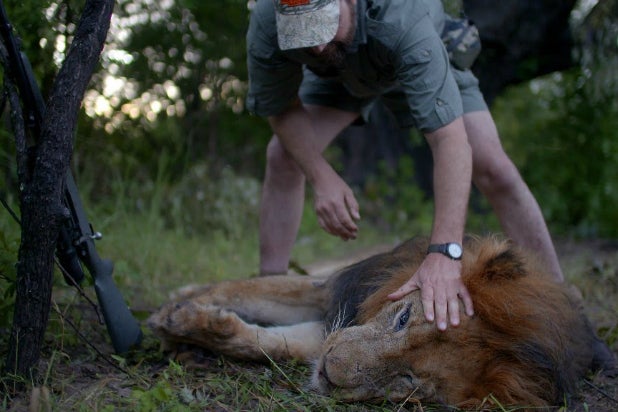 The Orchard and CNN Films announced that they have joined forces to acquire North American rights to Shaul Schwarz and Christina Clusiau’s documentary “Trophy.”

“Trophy” is produced by Lauren Haber and Julia Nottingham of Pulse Films.

The Orchard will handle all North American rights except broadcast, which will be acquired by CNN. A studio is closing international rights to the film.

A startling exploration of the evolving relationship between big-game hunting and wildlife conservation, “Trophy” screens at the Sundance Film Festival in U.S. Documentary Competition.

The Orchard will release the film later this year on a minimum of 150 screens.

“Endangered African species like elephants, rhinos and lions march closer to extinction each year,” a media release describing the film states. “Their devastating decline is fueled in part by a global desire to consume these majestic animals. ‘Trophy’ investigates the powerhouse industries of big-game hunting, breeding and wildlife conservation. Through the eyes of impassioned individuals who drive these industries — from a Texas-based trophy hunter to the world’s largest private rhino breeder in South Africa — the film grapples with the consequences of imposing economic value on animals.”

The deal was negotiated on behalf of The Orchard by Danielle DiGiacomo, VP of Acquisitions, and for CNN Films by Stacey Wolf, vice president for business affairs, and Courtney Sexton, vice president for content development for CNN Films. It was negotiated on behalf of the filmmakers by Josh Braun and Ben Braun of Submarine, UTA Independent Film Group and Anita Surendran of Gray Krauss Stratford Sandler Des Rochers LLP. Shaul Schwarz and Christina Clusiau are represented by UTA.

“This is a dream partnership for us,” filmmakers Schwarz and Clusiau said in a statement. “With The Orchard’s theatrical distribution ingenuity and CNN’s diverse audience, we can’t think of a better combination of companies to reach audiences on all sides of a potentially polarizing issue.”

“‘Trophy’ is a marvel of a film in that it takes an industry most think they know and reveals a personal, deeply complex and multi-faceted world that will have audiences questioning their original instincts,” Paul Davidson, The Orchard’s EVP, film and television, continued. “Shaul and Christina’s doc is a cinematic experience that we are thrilled to bring to theaters later this year.”

“Reel Peak Films, Pulse Films and The Long Run are great partners for CNN Films to bring an in-depth lens to the exploration of this complex, and in many ways unexpected, story,” Amy Entelis, executive vice president for talent and content development for CNN Worldwide, added. “We admire the vision of ‘Trophy’s’ talented co-directors, Shaul Schwarz and Christina Clusiau, and are happy to have a new collaboration with Shaul, whose work over the years for CNN has always elevated our storytelling.”