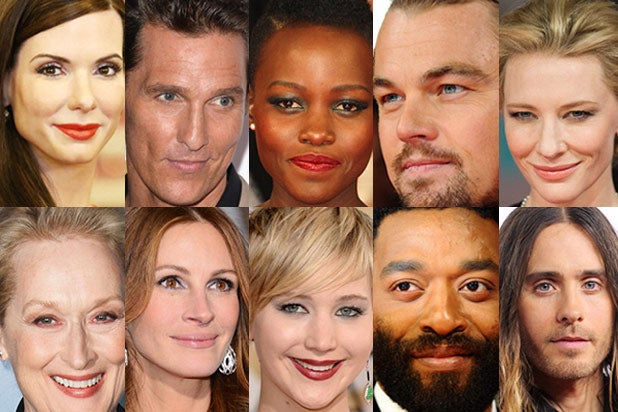 Oscar nominations are based on the performances of the actors and actresses, but Hollywood is a bottom-line business, so we checked up on how this year’s stars have done at the box office as the races wind down to the March 2 Academy Awards.

There are some numbers that will probably surprise you, because most of these actors and actresses cut their biggest box-office swaths with films other than the ones that earned them their nominations.

Also read: Ranking Oscar Best Picture Nominees as Investments: Which Film Made Back the Most Money?

This list is very unscientific, because it has to be. How, for example, can you really compare the career of Bruce Dern, who has been in at least 85 movies, with that of fellow Best Supporting Actor nominee Barkhad Abdi, who made his film debut in “Captain Phillips”?

The cumulative totals are based on numbers from Box Office Mojo. There’s no accounting for inflation unless mentioned, however. That means that some of the films listed as a performer’s “lowest grossing wide release” — we didn’t count limited release films — may well have been hits in their day.

Cate Blanchett (“Blue Jasmine”)
Her turns as Lady Galadriel in the hugely successful “Lord of the Rings” and “Hobbit” movies make Blanchett by far the queen of the box office among this year’s Best Actress Oscar nominees. Outside of Middle Earth, her biggest payday was 2008’s “The Curious Case of Benjamin Button.” The 1998 drama “Elizabeth” is her top grossing film as a leading lady.
No. of movies: 33
Top grossing: “The Lord of the Rings: Return of the King” ($1.1 billion) 2003
Lowest grossing wide release: “Elizabeth the Golden Age” ($74 million) 2007
Cumulative: $5.8 billion
Power Grid score: 88

Judi Dench (“Philomena”):
Like Blanchett, it’s her recurring roles in a blockbuster franchise – Dench has played “M” in seven James Bond movies – that make the venerable British actress a very heavy box-office hitter. Her biggest hit when not in Her Majesty’s Secret Service was 1998’s “Shakespeare in Love,” for which she won the Supporting Actress Oscar. This year’s “Philomena” – which is at $78 million globally and counting – is her biggest score in a leading role.
No. of movies: 30
Top grossing: “Skyfall” ($1.1 billion) 2012
Lowest grossing: “J. Edgar” ($84 million) 2011
Cumulative: $5 billion
Power Grid score: 88

Meryl Streep (“August: Osage County”)
Audiences have been turning out in numbers for her films since 1979’s “Kramer vs. Kramer,” which remains her biggest hit when adjusted for inflation. She’s had films that have taken in more than $100 million in five decades, with her biggest box office scores – “Mama Mia” and “The Devil Wears Prada” — coming in 2008 and 2006, respectively. She’s never been in a franchise film or a sequel though, which is why she’s down this list.
No. of movies: 47
Top grossing: “Mama Mia” ($609 million), 2008
Lowest grossing: “Rendition” ($27 million) 2009
Cumulative: $2.9 billion
Power Grid score: 94

Christian Bale (“American Hustle”)
Two billion-dollar “Dark Knight” movies have lifted the actor’s box-office bottom line into the stratosphere recently. But he’s been making major money since 1995, when he was a voice in Disney’s animated “Pocahontas,” which brought in $346 million globally. “American Hustle,” at $214 million and counting, is a bona fide hit. But the film just before that, last year’s “Out of the Furnace,” bombed.
No. of movies: 33
Top grossing: “The Dark Knight Rises” ($1 billion) 2012
Lowest grossing: “Out of the Furnace” ($11 million) 2013
Cumulative: $3.9 billion
Power Grid score: 93

Bruce Dern (“Nebraska”)
We were forced to throw out the book – or the box office stats, in this case – for the veteran, whose film career dates all the way back to the 1960 Elia Kazan film “Wild River,” before cumulative numbers were kept. Make more than 85 movies as Dern has, and you’re going to have some misses. But he’s been in his share of hits, too, including “Django Unchained,” “Monster,” “Coming Home” and “The Cowboys.”
No. of movies: At least 85
Top grossing: “Django Unchained” ($425 million) 2012
Power Grid score: 30

Julia Roberts (August: Osage County”)
She doesn’t carry the box office clout that she once did — her top eight movies at the global box office all came before 2010 – but her all-time bottom line is up there with the biggies. She’s never been able to match the success of “Pretty Woman” however, which took in $463 million globally – on a $14 million budget.
No. of movies: 39
Top grossing: “Pretty Woman” ($463 million) 1990
Lowest Grossing: “Larry Crowne” ($72 million) 2011
Cumulative: $5.3 billion
Power Grid score: 85

Jennifer Lawrence (“American Hustle”)
She’s built a big-time box-office profile as Katniss Everdeen of the “Hunger Games” and Mystique in “X-Men: First Class, since breaking out in the 2010 indie film “Winter’s Bone.” But her last two outings with David O. Russell, both of which have brought Oscar nominations, have scored as well. “Silver Linings Playbook” took in $236 million in 2012, and “American Hustle” is at $214 million and counting.
No. of movies: 11
Top grossing: “The Hunger Games: Catching Fire” ($862 million) 2013
Lowest Grossing: “House at the End of the Street” ($39 million) 2012
Cumulative: $2.4 billion
Power Grid score: 87

Sally Hawkins (“Blue Jasmine”)
Woody Allen’s dark comedy “Blue Jasmine” is by far her biggest film at the box office. “Jane Eyre,” in which she had a supporting role, made nearly $35 million globally in 2011, but never received a wide release in the U.S. She specializes in supporting roles, but has played a lead role in indie films “Happy Go Lucky” ($18 million) and “Made in Dagenham” ($12 million).
No. of movies: 12
Top grossing: “Blue Jasmine” ($94 million) 2013
Cumulative: $233 million
Power Grid score: 52

Lupita Nyong’o (“12 Years a Slave”)
Her role in Steve McQueen’s brutal slave saga was her American film debut, so there’s no track record for the Kenyan actress and music video director. “12 Years a Slave” has taken in $109 million so far on a budget of $20 million, and will add to that if the Oscars go its way. She’ll next be seen on the big screen in the Liam Neeson airplane thriller “Non-Stop,” which opens Friday.
No. of movies: 1
Top grossing: “12 Years a Slave” ($109 million) 2013
Cumulative: $109 million
Power Grid score:

Jonah Hill (“The Wolf of Wall Street”)
“Django Unchained” is his biggest live-action hit, but Hill has had a major impact at the box office with his voice work on “How to Train Your Dragon.” “Megamind,” ‘Dr. Seuss’ Horton Hears a Who!” and “The Lego Movie.” He’s also been in eight live-action comedies that have topped $170 million worldwide,
No. of movies: 23
Top grossing: “How to Train Your Dragon” ($495 million) 2010
Lowest grossing: “The Invention of Lying” ($32 million) 2009
Cumulative: $3.5 billion
Power Grid score: 81

Barkhad Abdi (“Captain Phillips”)
The Somalian actor, who made his debut as a modern-day pirate in the Tom Hanks thriller “Captain Phillips,” hasn’t lined up his next film gig yet. But when you land an Academy Award nomination in your first time out, you get to be little picky.
No. of movies: 1
Top grossing: “Captain Phillips” ($217 million) 2013
Cumulative: $217 million
Power Grid score: