On a big night for Deaf representation at the Oscars with “CODA” taking Best Picture, a livestream featuring American Sign Language (ASL) interpreters of the Oscars broadcast racked up approximately 300,000 views alongside the main show.

“CODA” and Best Supporting Actor winner Troy Kotsur were not the only deaf talent representing the Oscars, as the short film “Audible” was also nominated and Japan’s “Drive My Car” features a deaf character as well. And given that added exposure for the deaf community, the Academy this year worked to make its show inclusive by employing its ASL livestream as a sort of “second screen” to the main broadcast.

The stream was available both on the Oscars YouTube page and through Oscars.com, and it featured four different interpreters rotating and providing ASL translations to the live show throughout the evening.

The Academy did announce that at one point the livestream experienced some technical difficulties, but the issue was quickly resolved. And it also employed 10 different interpreters throughout the night, including the four on the livestream, four interpreting the live show for guests at the Dolby Theater both inside and outside the auditorium and two who were in the press room interpreting interviews with Oscar winners for the press. 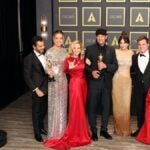 Kotsur’s win provided one of the sweeter Oscar moments from Sunday when 2021’s Best Supporting Actress winner Yuh-Jung Youn initially did her best to sign “congratulations, I love you,” to indicate to Kotsur that he had won – and then stood by to hold his Oscar so that he could appropriately sign.

Some online did criticize the show for not making the ASL interpreters visible on the whole broadcast on the main screen. That follows a gaffe from last year’s Oscars in which the camera cut away from Marlee Matlin as she was signing during her presentation.

For the record: A previous version of this story misspelled the name of Kotsur’s interpreter Justin Maurer.