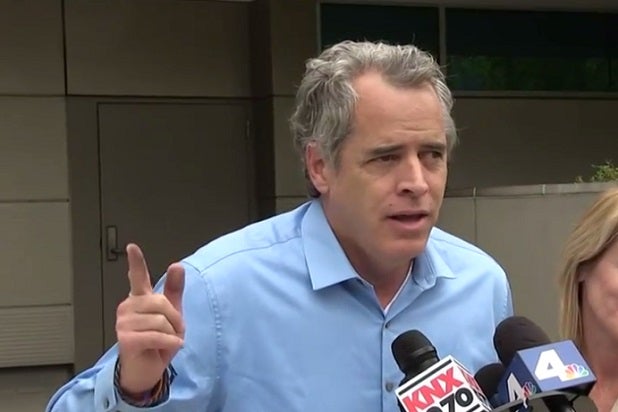 The man who allegedly destroyed Donald Trump’s star on the Hollywood Walk of Fame is free — for now — and ready to make his case in the legal system.

James Otis, who was arrested Thursday in connection with the incident, spoke to reporters following his release, saying that he hopes he gets his day in court, TMZ reported.

“Yes, I do hope it goes to trial,” Otis said. “That’s what happens when you do something wrong; there are consequences.

“As well as [for] Mr. Trump,” he continued. “There are no consequences for him. He thinks he’s in charge all the time. He makes lies; he’s a serial liar, a misogynist.”

Deadline posted video of the incident Wednesday, and reported that the man identified himself as Jamie Otis, who said he was hoping to remove the star and auction it off to raise money for the women who have publicly accused the GOP presidential candidate of sexual misconduct. Trump has denied all allegations.

A police cruiser reportedly arrived on the scene at 6:15 a.m., but according to Deadline, Otis was already gone. An LAPD spokesperson told TheWrap the department received a vandalism call at 6 a.m. and was investigating the incident.

A pick, sledgehammer, construction vest, construction net and construction hat were recovered at the scene. The LAPD spokesperson estimated the damage at $2,500, which is a felony.

During his press conference, Otis also shed some light on his history, saying that he spent time studying “non-violence work” and later taught in Third World countries, “doing direct action, which is what I just did on Hollywood Walk of Fame.”

Watch Otis invite the wrath of the legal system in the video.