A “Percy Jackson and the Olympians” series is coming to Disney+.

The Disney Branded Television series is produced by 20th Television. Casting is underway. Steinberg is also the showrunner of FX’s upcoming series for Hulu “The Old Man.” 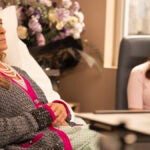 Also Read:
Is ‘And Just Like That…’ Ageist? Why Carrie and Her Friends Seem Over the Hill at 50

Here’s the logline for the Disney+ series:

Geared towards a general audience and especially tweens, teens, and young adults, the live action series tells the fantastical story of a 12-year-old modern demigod, Percy Jackson, who’s just coming to terms with his newfound supernatural powers when the sky god Zeus accuses him of stealing his master lightning bolt. Now Percy must trek across America to find it and restore order to Olympus.

The “Percy Jackson and the Olympians” books were released between 2005-2009. “The Lightning Thief” and “Sea of Monsters” are followed by “The Titan’s Curse,” “The Battle of the Labyrinth” and “The Last Olympian.”

The first two “Percy Jackson” books were previously adapted into films by 20th Century Fox, which is now owned by Disney. Logan Lerhman played the title character, a demigod and the son of the Greek god Poseidon, in “Percy Jackson & the Olympians: The Lightning Thief” and its sequel, “Percy Jackson: Sea of Monsters.” The first film was directed by “Harry Potter” alum Christopher Columbus, with Thor Freudenthal helming the second film.

“With Rick Riordan, Jon Steinberg and Dan Shotz leading our creative team, we’re deep into creating a compelling TV series worthy of the heroic mythological characters that millions of Percy Jackson readers know are well-worth caring about, and we’re eager to invite Disney+ audiences into stories that are true to the blockbuster franchise and full of anticipation, humor, surprise, and mystery,” said Disney Branded Television president Ayo Davis.

“The opportunity to deliver a new fantastical series based on the bestselling book franchise to audiences around the world is thrilling and we look forward to what our partners at 20th Television, Disney Branded Television and the ingenious Rick Riordan have in store for demigods everywhere.” said Michael Paull, president of Disney Streaming.