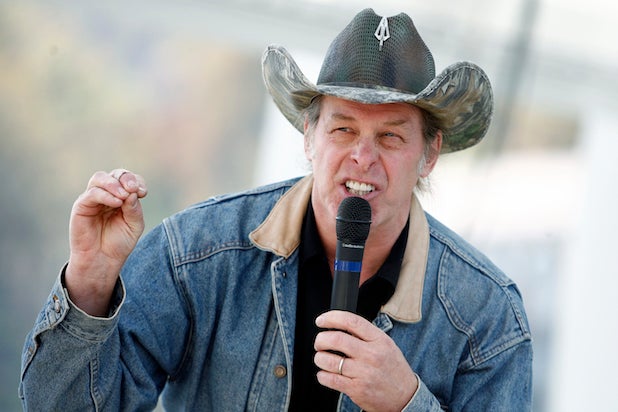 Sounds like Piers Morgan is hoping that Ted Nugent will choke on his own words.

British media personality Morgan tore into the musician and gun-rights advocate Nugent on Tuesday, branding him an “idiot” after Nugent seemed to suggest that poor diets for children could be a contributing factor to school shootings.

Morgan took aim at Nugent in reaction to a tweet published by Media Matters stating, “NRA board member Ted Nugent blames school shootings on unhealthy diets: ‘Check out what we are feeding our children and you will find the answer to this calamity.'”

To which Morgan replied, “Guns, you idiot. You’re feeding them GUNS.”

The Media Matters story linked to in its tweet quoted Nugent from Monday’s edition of Newsmax’s “The Joe Pags Show.”

“On my Facebook right now I have highlighted a documentary that concludes — and you cannot escape the reality, the diet of these children, from birth — you talk about ADD and autism. It’s a direct result, in more cases than not, I believe in the 90 plus percentile, a diet of sugars and chemicals and fake garbage that doesn’t allow them to think properly,” Nugent is quoted as saying. “If you really look at the pharmaceutical attack on our children, trying to compensate for a diet that is absolutely poisonous. And in every instance, you mark my words when the studies are finalized, you will find that Columbine, Virginia Tech, Aurora, certainly Sandy Hook, these maniac murderers in Parkland and now Santa Fe, if you really studied the slovenliness and the zombie-like conduct of these murderers, you go back to their diet and examine what they’ve put into their sacred temple, and it’s all garbage, it’s all poison and I know a lot of people are going to poo poo what I’m saying, but go to my Facebook right now and examine this documentary.”

According to Media Matters, the musician continued, “And it goes right to the garbage we feed our children. I know people think I’m trying to get away from the gun issue, but it’s not a gun issue. It is a conduct issue. Now you add the violent games, the violent movies and you add the fact that the parents often, more often than not, just don’t don’t guide. Don’t nurture, don’t discipline their children and you’ve got kids out of control. Check out what we are feeding our children and you will find the answer to this calamity.”

See Morgan give Nugent a mouthful below.