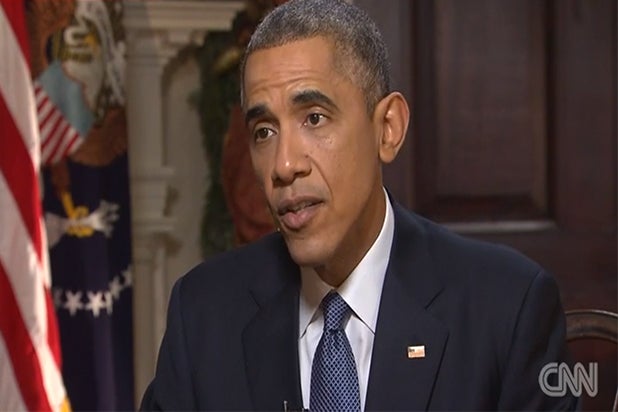 President Barack Obama doesn’t think North Korea’s hack of Sony Pictures Entertainment is “an act of war,” but he certainly considers it a brazen crime.

“I think it was an act of cyber vandalism that was very costly, very expensive,” the President said in an interview that aired Sunday on CNN’s “State of the Union” with Candy Crowley. “We take it very seriously. We will respond proportionately, as I said,” he added.

Mr. Obama also repeated his criticism of Sony for deciding not to release “The Interview” in theaters.

“I was pretty sympathetic to the fact that they’ve got business considerations they’ve got to make,” he said. “Had they talked to me directly about this decision, I might have called the movie theater chains and distributors and asked them what that story was.”

As TheWrap previously reported, the President called the studio’s decision to shelve the Seth Rogen-James Franco comedy a “mistake” on Friday, during his year-end press conference.

“We cannot have a society in which some dictator in some place can start imposing censorship here in the U.S. If somebody can intimidate folks out of releasing a satirical comedy, imagine what they’ll do when they see a documentary or political film they don’t like?” the President said at the press conference.

A short time later, Sony Pictures CEO Michael Lynton fired back in an interview on CNN, suggesting Mr. Obama didn’t have all the facts.

Also Read: Sony Blames Movie Theaters for ‘The Interview’ Decision: ‘We Had No Choice’

“The President, the Press, and the public are mistaken as to what actually happened. We do not own movie theaters. We cannot determine whether or not a movie will be played in movie theaters,” Lynton said.

“The movie theaters came to us one by one over the course of a very short period of time – We were completely surprised by it and announced that they would not carry the movie. At that point in time, we had no alternative but to not proceed with the theatrical release on the 25th of December,” the Sony executive added.

Lynton also revealed that no VOD or ecommerce site had stepped forward and offered to show the movie.

The plot of the controversial film centers on two journalists who land an interview with North Korean dictator Kim Jong-un, and are recruited by the CIA to turn their trip to Pyongyang into an assassination mission.

On Saturday, the chairman of the Republican National Committee, sent a letter urging the CEOs of 10 major theater chains to show “The Interview.”