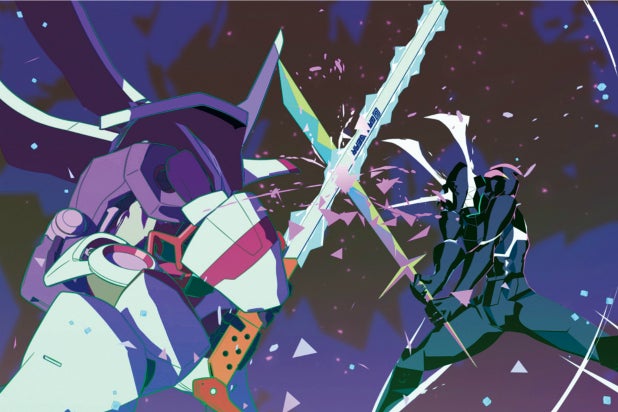 Injecting an intoxicating shot of frantic energy and sleek color directly into your pupils, the postapocalyptic sci-fi action saga “Promare” plays like an anime-induced euphoric trip.

Marking the first feature release for both Japanese outfit Studio Trigger and its co-founder and director Hiroyuki Imaishi, this visual potion spiced with fiery duels and supernatural machinery is at its most potent when taken without much concern for its bewildering mechanics.

Envisioned for the big screen, “Promare” benefits from visibly elevated production values that distinguish it from Trigger’s television slate. The backgrounds are digitally crafted with a hyper-polished finish, and the awe-inspiring aerial fights are choreographed so fluidly that they overshadow what hybrid CG/live-action productions like the “Transformers” or “Avengers” franchises aspire to achieve, exemplifying how animation this elegantly conceived can be conducive to sequences so thrilling they are nearly hypnotic.

Before dropping us in its wildly stylized dystopia, complete with giant robots, the film introduces its first set of plot points, a batch that only increases in entanglement as “Promare” goes along. Thirty years ago, human beings with a mystifying mutation suffered from spontaneous combustion, causing a disastrous global fire known as the Great World Blaze that nearly extinguished humanity. From the ashes, the city of Promepolis rose as a new sustainable society ruled by the seemingly benevolent governor Kray Foresight (voiced by Masato Sakai).

The remaining citizens afflicted by this destructive power, which allows them to wield fire, were branded as the “Burnish” and considered terrorists for merely existing. Persecuted by Foresight’s Freezer Force, these marginalized people now find hope in Mad Burnish, an insurgent group led by Lio Fotia (Taichi Saotome), targeting the system to free their incarcerated fellow Burnish. More details — involving a space-time rupture, a parallel universe inhabited by superhuman entities called the Promare and other rambling blather — surface later as explanations, but don’t have the impact of the tantalizing battles.

Plot-heavy stretches aside, what steers “Promare” into resonance is the improbable alliance between the radical Lio Fotia and douchey hero Galo Thymos (Ken’ichi Matsuyama, “Death Note”), an obviously self-obsessed (but nonetheless valiant) member of the firefighting squad Burning Rescue. Indoctrinated into believing the Burnish are a criminal menace, blue-haired Galo reconsiders his position when a man he idolizes is revealed to be a deviant.

Upon grasping the Burnish’s plight, the bro-ish lead switches sides. While Lio literally manipulates flames, Galo’s strength comes from his lionhearted sense of duty, which he describes as his undying, internal blaze. The pair’s love-hate friendship yields not only exhilarating brawls and fist bumps but also an unanticipated, but undeniably refreshing, homoerotic moment as scorching in impact as the most earth-shattering punch.

While Galo is the pinnacle of archetypal straightness, and Lio is closer to a nonbinary figure than a traditionally masculine man, their banter appears to signal a fellowship between the dominant group and a minority that goes beyond their partnership to save the world from imminent doom.

Resistance resonates as a recurrent message in “Promare,” where a segment of the population is demonized, discriminated against and caged until those directly affected (and their allies) confront a wicked and arrogant leader as a unified force. The theme is undoubtedly topical.

Another theme involves climate change since the Earth’s core is bound to fry the entire planet. Here too, the only way to solve anything in Promepolis, and in our reality, is collective cooperation.

These lessons are, of course, more garnish than main ingredient in this lively concoction. As is the case with many pop-culture properties involving humanoid robots piloted by brave youngsters (think “Evangelion,” “Pacific Rim” and even “Power Rangers”), epic showdowns with massive weaponry serve as the bread and butter of “Promare.”

Pink-hued flames that take the form of dragons, guns that fire ice cubes, giant swords used with utmost agility and a creature born out of the fusion between Lio and Galo (on two different occasions) are just a few pieces of the delicious eye-candy assortment from the mind of Trigger’s Imaishi, in tandem with creative director Hiromi Wakabayashi and designer Shigeto Koyama (“Big Hero 6”).

For a company that has catered mostly to anime connoisseurs with an acquired taste for irreverence and unhinged imagination, Trigger has produced a feature capable of reaching viewers outside its fan base — adventurous ones, that is — by toning down some of its most provocative traits and condensing a narrative that could have spanned several seasons into a single serving of bizarre fun.

Think of “Promare” as a vast feast with too many flavorful offerings to taste in one seating, and where all the intricate details of how everything was put where it is are less important than the overall sensory overload you’ll experience. Have a bite without asking many questions about the dish’s origin, and you’ll have a much better time. Repeated servings, or viewings in this case, are encouraged.