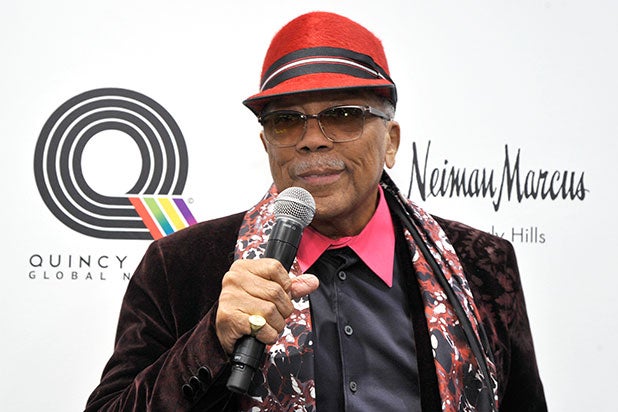 Quincy Jones has revealed a whole lot in a new interview, discussing Michael Jackson’s plastic surgery, who he says killed JFK, dating Ivanka Trump and his thoughts on why the Beatles were “the worst musicians in the world.”

When asked what he thinks is his greatest musical innovation, he said, “Everything I’ve done.”

“Everything was something to be proud of — absolutely,” he said. “It’s been an amazing contrast of genres. Since I was very young, I’ve played all kinds of music: bar mitzvah music, Sousa marches, strip-club music, jazz, pop. Everything. I didn’t have to learn a thing to do Michael Jackson.”

The legendary record producer called Donald Trump a “crazy motherf–er. Limited mentally — a megalomaniac, narcissistic. I can’t stand him. I used to date Ivanka, you know.”

He continued, “Twelve years ago. Tommy Hilfiger, who was working with my daughter Kidada, said, ‘Ivanka wants to have dinner with you.’ I said, ‘No problem. She’s a fine motherf–er.’ She had the most beautiful legs I ever saw in my life. Wrong father, though.”

“If you haven’t been governor of a state of the CEO of a company or a military general, you don’t know how to lead people,” he said.

Jones saved his sharpest criticism for President Trump. “A symphony conductor knows more about how to lead than most businesspeople — more than Trump does. He doesn’t know s—. Someone who knows about real leadership wouldn’t have as many people against him as he does. He’s a f—ing idiot,” he said.

Jones, who co-produced Jackson’s biggest-selling albums, said the pop star “stole a lot of songs” and had plastic surgery because his father “told him he was ugly,” although he tried to “justify it and say it was because of some disease he had.”

4. He Thought the Beatles Were “The Worst Musicians In The World”

“They were the worst musicians in the world. They were no-playing motherf—ers. Paul was the worst bass player I ever heard. And Ringo? Don’t even talk about it,” said Jones, who arranged a version of “Love Is a Many-Splendored Thing” for Starr’s 1970 solo debut album Sentimental Journey, which was produced by the Beatles’ frequent collaborator George Martin.

5. He Says He Knows Who Killed Kennedy

One thing Jones said he wishes he didn’t know is “who killed Kennedy.” “[Chicago mobster Sam] Giancana. The connection was there between Sinatra and the Mafia and Kennedy. Joe Kennedy — he was a bad man — he came to Frank to have him talk to Giancana about getting votes.”

The theory is well-known among Kennedy conspiracists, including the idea that Giancana helped Kennedy win Illinois in 1960.

Added the super-producer: “We shouldn’t talk about this publicly.”

6. He Says Paul Allen “Sings and Plays Just Like Hendrix”

Jones is a big fan of Paul Allen, the Microsoft cofounder and multi-billionaire.

“I went on a trip on his yacht, and he had David Crosby, Joe Walsh, Sean Lennon — all those crazy motherf—ers. Then on the last two days, Stevie Wonder came on with his band and made Paul come up and play with him — he’s good, man.”

“I don’t know. I love Bono with all my heart, but there’s too much pressure on the band. He’s doing good work all over the world. Working with him and Bob Geldof on debt relief was one of the greatest things I ever did. It’s up there with ‘We Are the World.'”

“It’s just loops, beats, rhymes and hooks. What is there for me to learn from that? There ain’t no f—ing songs. The song is the power; the singer is the messenger. The greatest singer in the world cannot save a bad song. I learned that 50 years ago, and it’s the single greatest lesson I ever learned as a producer. If you don’t have a great song, it doesn’t matter what else you put around it.”

9. But There Are a Few Modern Artists Doing Good Work

“Bruno Mars. Chance the Rapper. Kendrick Lamar. I like where Kendrick’s mind is. He’s grounded. Chance, too. And the Ed Sheeran record is great. Sam Smith — he’s so open about being gay. I love it. Mark Ronson is someone who knows how to produce.”

11. Marlon Brando Slept With Marvin Gaye and James Baldwin, According to Jones

“[Marlon] Brando used to go cha-cha dancing with us. He could dance his ass off. He was the most charming motherf—er you ever met. He’d f— anything. Anything! He’d f— a mailbox. James Baldwin. Richard Pryor. Marvin Gaye… Come on, man. He did not give a f—! You like Brazilian music?”

12. He Suffered a Breakdown After Working on “The Color Purple”

“What happened was that I was a producer on that movie and everybody went on vacation after we finished filming — everybody except me. I had to stay home and write an hour and 55 minutes of music for the movie. I was so f—ing tired from doing that, I couldn’t see. I put too much on my plate and it took its toll. You learn from your mistakes and I learned I couldn’t do that again.”

“I was not in favor of doing it, but the rappers wanted to record something as a tribute to me, where they’d do versions of songs that I’d done over my career. I said to them, ‘Look, you got to make the music better than we did on the originals.’ That didn’t happen. T-Pain, man, he didn’t pay attention to the details.”

At an intimate night of storytelling and music, Lady Gaga made an unannounced appearance to perform "You and I" on piano during the "Backstage at the Geffen" event on Sunday night.