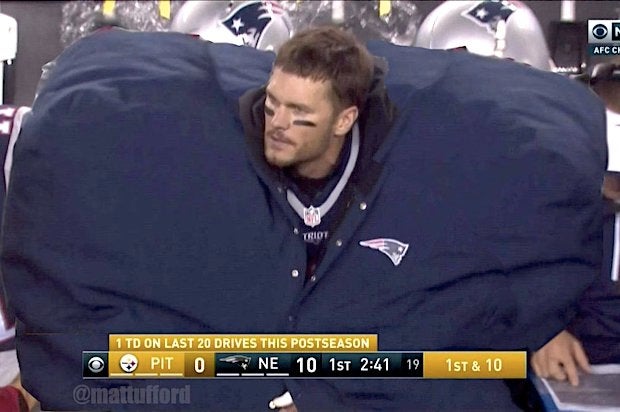 The AFC championship game was easily the big winner on Sunday night (Tom Brady’s big coat notwithstanding), drawing an estimated 41.2 million viewers and a 13.4 rating according to early Nielsen estimates.

served as a great lead-in for the new CBS competition series “Hunted,” in which teams try to avoid detection while being tracked by expert investigators. Though these numbers will be adjusted later today, “Hunted” averaged 10.8 million viewers and a 3.6 rating at 10 p.m.

CBS easily came in first with an estimated 10.9 rating and 33.6 million viewers, airing only the AFC championship game and “Hunted.”

Fox finished second in the key adults 18-49 demographic with a 1.0 rating but fourth in total viewers with 2.5 million. The network aired mostly repeats, save a new episode of “Son of Zorn” at 8:30, which drew a 0.9 rating and 2 million viewers.

NBC finished third in the demo with a 0.7 rating and second in total viewers with 3.3 million, airing only repeats and “Ted.”

ABC tied for fourth in the demo with a 0.6 but third in total viewers with 3.2 million, airing only repeats.

Univision tied for fourth in the demo with a 0.6 rating and fifth in total viewers with 1.8 million.

Telemundo finished sixth overall with a 0.5 rating and 1.5 million viewers.