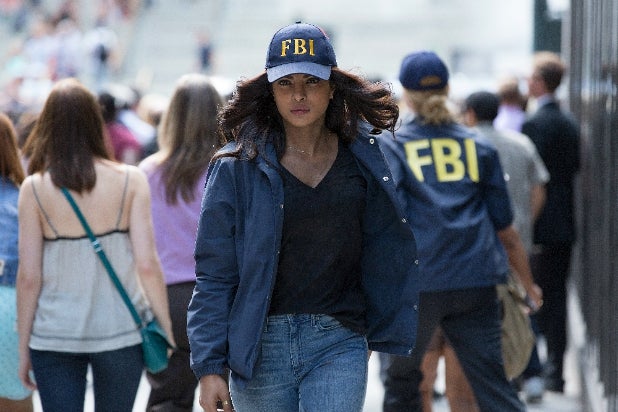 ABC’s “Quantico” got off to a solid start on Sunday night, but was still not good enough to catch Donald Trump’s appearance on “60 Minutes.”

The Priyanka Chopra-led spy drama opened to a 1.9 rating/6 share in the advertiser coveted adults 18-49 demographic and pulled in 7.1 million viewers, according to preliminary Nielsen estimates. It built on the lead in from the new Don Johnson/Chace Crawford series “Blood & Oil,” which opened to a 1.4/4 and 6.3 million viewers.

On CBS, interviews with Donald Trump and Vladimir Putin scored big numbers for the season premiere of “60 Minutes,” with the hour long telecast nabbing a 2.9/9 and 15 million viewers. However, this season’s premiere was still down 17 percent from last season’s. It nevertheless provided a good lead in the two-hour series finale of “CSI,” which drew a 1.8/5 and 12.1 million viewers.

NBC won the night thanks to the NFL matchup between the Denver Broncos and the Detroit Lions. The game scored a 7.3/21 in the key demo and averaged 19.7 million vieweres in the 8:30pm-11pm ET time slot. The network finished the night with 6.1/19 and 16.9 million viewers.

Fox’s “Last Man on Earth” returned to a 1.4/4 and 3.1 million viewers. It was the only Fox Sunday night show to stay even from last season’s premiere. All others were down.