Relativity Media sued Netflix for breach of contract and libel on Tuesday, claiming that a “bad faith scheme” by the streaming giant caused the studio “damages in excess of $1.5 billion.”

Lawyers for Ryan Kavanaugh‘s company claimed that Netflix used them to gain standing in Hollywood, and then ruthlessly attempted to dissolve an output deal so lucrative that Relativity became dependent on its guaranteed payments to survive.

The suit also accuses Netflix and its Chief Content Officer Ted Sarandos of falsely representing its obligations to Relativity in the press, publicly criticizing the studio’s business model and poisoning Relativity’s name to power brokers like WME co-CEO Ari Emanuel — all in an elaborate and “aggressive smear campaign.”

“We find this lawsuit baseless and ironic,” a Netflix spokesperson told TheWrap via email.

According to the legal filing obtained by TheWrap, at the time the two companies forged an output deal in 2010 “Relativity was the third largest mini-major studio in the world, having been involved in the production of over 100 major feature films. Netflix, by contrast, was a virtual non-entity.”

The licensing agreement gave Relativity Media, which emerged from Chapter 11 bankruptcy this year and is currently for sale, fees based on the box office performance of any given film — with a guaranteed cash minimum of $3.7 million which could escalate to nearly $20 million per movie based on theatrical revenue. 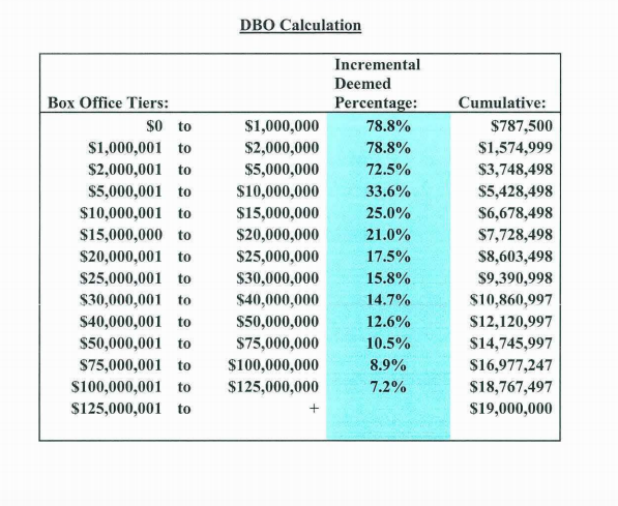 A breakdown of the Relativity-Netflix “Fee Card,” or percentages Relativity is paid to stream its titles with Netflix

But six years later, Netflix’s market capitalization “rose by billions, [and] Netflix wasted little time turning on its maker, Relativity,” the papers said, likening its dilemma to Dr. Frankenstein and his famous monster.

Relativity contends that by “choosing Netflix as its pay television or SVOD partner, Relativity single-handedly converted Netflix from a DVD mail-order company into a pay television business.”

Given the service’s present glut of content partners and robust slate of original programming, it’s easy to forget that from 2010 to 2013, approximately 85 percent of Netflix’s new films were from Relativity, the suit said.

Three years into the deal, Netflix attempted to renegotiate the fee rate to more favorable terms to the streaming service, the suit said. Relativity would not budge, except for a small amendment to the required number of screens the films had to play on prior to coming available for Netflix users. At that point, Kavanaugh’s company was using projected Netflix earnings as collateral for production and operating costs.

Netflix also attempted to dissolve the output deal after Relativity filed for Chapter 11 in July 2015 — first claiming that the studio’s financial problems prohibited it from releasing films and fulfilling its end of the deal. Bankruptcy Court Judge Michael Wiles did not agree, and declined to void the agreement. Netflix later lost an appeal, and a subsequent request to stream Relativity movies before their theatrical release — which would significantly kill their chances of success at the box office.

Though the suit does not spell out how it came up with its projection of $1.5 billion in losses, the papers note that Netflix paid between $100 million and $300 million per year to Relativity under the deal — “a known substantial piece of Relativity’s business.”

It’s unclear why Netflix would be responsible for the drop in payments to Relativity — the distributor did not release any new movies theatrically for more than a year in the midst of its bankruptcy woes. In addition, the two movies it did release last month, the Kate Beckinsale thriller “The Disappointments Room” and the Kristen Wiig-Zach Galifianakis comedy “Masterminds,” both underperformed at the box office.

(According to the rate card, Relativity stands to receive $3.7 million from Netflix for “The Disappointments Room” even though the movie grossed just $2.4 million in domestic theaters.)

“Unsuccessful in removing the obligations of the License Agreement through renegotiation, it would do the next best thing: destroy Relativity completely by putting it out of business,” Relativity argued in its suit. “Netflix has endeavored to do so by undertaking an aggressive smear campaign against Relativity, making false and misleading statements regarding its rights to certain Relativity-licensed films.”

Relativity Chairman and CEO Kavanaugh hinted on Sunday something was in the pipeline in his stormy relationship with Netflix.

“#Netflix is about to understand ‘you reap what you sow’. you can’t be as manipulating and dishonest as they are and get away with it,” he tweeted.

Relativity is seeking damages to be determined by the court, on top of legal fees and other expenses incurred.