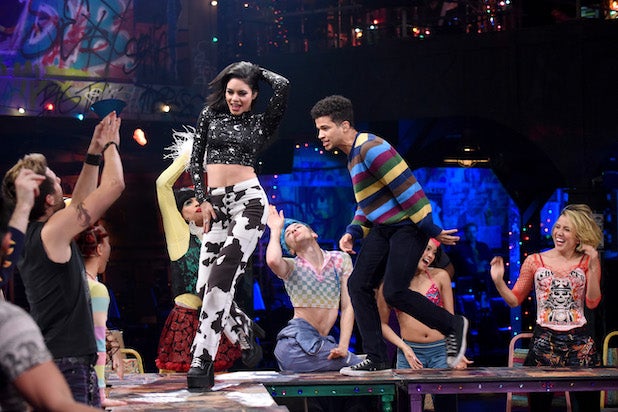 Fox’s “Rent” got evicted in ratings on Sunday — at least when comparing the semi-live TV musical to all the ones that came before it. And yes, that includes another poor performer, Fox’s “A Christmas Story Live.”

Due to a cast member’s injury, last night’s “Rent” used mostly pre-taped footage from a dress rehearsal. The show’s effort received a 1.4 rating among adults 18 to 49 and 3.415 million total viewers, per Nielsen’s fast national numbers.

Compare that with December 2017’s “A Christmas Story Live,” which drew a 1.5 rating and 4.48 million viewers. That one, which went up against “Sunday Night Football” on NBC, had been the previous low for these live-TV musicals.

All that said, Fox still managed to tie ABC last night atop the key demo in primetime averages. Fox’s “Big 4” competition all aired at least one rerun, however, and Fox finished third in terms of overall eyeballs.

For Fox, primetime started with animated comedy repeats at 7, followed by “Rent” from 8-11, which put up the previously noted demo rating and audience tally, along with a 5 share.

NBC was fourth in ratings with a 0.7/3 and fourth in viewers with 2.8 million. Following back-to-back repeats of “The Titan Games,” at 9 p.m., the two-hour “American Ninja Warrior: USA vs. The World” special had a 0.7/3 and 2.8 million viewers.

The CW was seventh in ratings with a 0.3/1 and in viewers with 1 million.