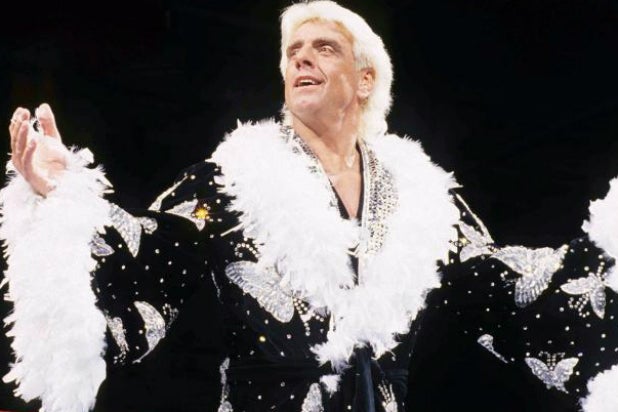 Ric Flair is going from the squared-circle to the big screen: The WCW and WWE legend has reached an agreement in principle to join R-rated feature film dramedy “Uncle Steamroller & Champion Rabbit,” TheWrap has learned exclusively.

“Uncle Steamroller,” which will mark Flair’s feature-length acting debut, was written by Brian Kowalchuk and is currently in development. Kowalchuk is supervising producer.

Oh and yes, it’s a wrestling movie — did we not mention that?

Flair is set to play the president of the World Wrestling Union, a Las Vegas syndicate that owns the wrestling tour on which the titular Uncle Steamroller attempts to stage his comeback.

“I really like this wonderfully written script and find it to be very entertaining,” Flair told TheWrap. “The edgy sense of humor is great, but the story also has a good heart. I’m expecting the inspirational story line will appeal to fans that extend beyond my loyal core wrestling base, and I am seriously looking forward to getting this film in front of worldwide audiences. Wooooooooooooooooo!”

Also Read: Ric Flair Is Cool With Any Wrestler Using His Signature Figure 4 Leg Lock: 'Good Luck With It'

“It’s really cool to have the fabulously talented Ric Flair on board and we are super-thrilled. I tried to write something fresh and bold; and put a lot of work into it,” Kowalchuk added. “Even so, I think I might’ve gotten a bit lucky because it seems like maybe it could find a good audience. Especially considering it’s R-rated material.”

The “Nature Boy” will also executive produce the movie, as will his fiancee Wendy Barlow.