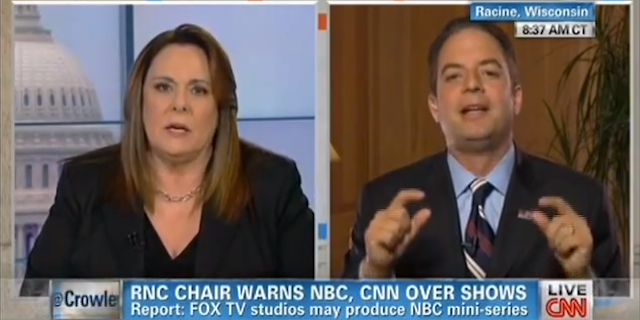 The RNC has said that it will not let NBC (or MSNBC) air GOP primary debates should the network follow through with plans to air the Diane Lane-starring miniseries — and the same would go for CNN if it airs a scheduled Clinton documentary.

But it will not extend that same boycott to the people or organizations responsible for creating them, Priebus said on Sunday's "State of the Union."

"Our party has to quit availing itself to biased moderators and companies that put on television … documentaries and miniseries about a particular candidate that we all know is gearing up to run for president, and that's Hillary Clinton," Priebus said. "I'm not interested in whether they use the same caterer or they all drink Diet Coke or, you know, I'm not boycotting Diane Lane."

Crowley asked if there was a difference between an actress who appeared in a role and the company that produced the entire miniseries she starred in. Priebus responded by alleging that "some researcher at CNN or NBC worked for a few days to find some little connection … I think it's totally ridiculous and stupid."

"I'm going to boycott the company that puts the miniseries or the documentaries on the air for the American people to view," he said.