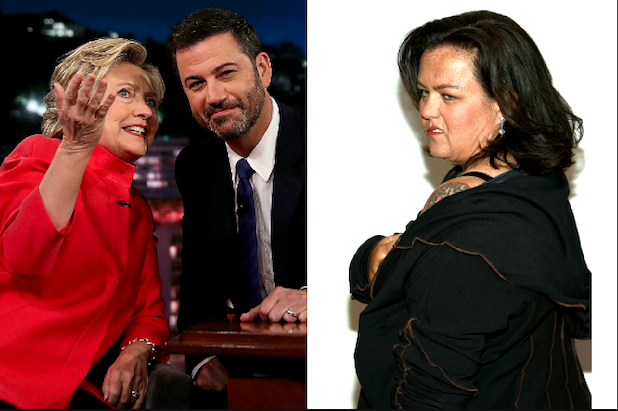 Rosie O’Donnell took issue with Hillary Clinton’s appearance on “Jimmy Kimmel Live!” Monday night, saying she was disappointed to see the Democratic nominee reading one of Donald Trump’s mean tweets about her.

In a tweet to Gay Star News on Tuesday, O’Donnell said, “She read it… disappointing.”

During their sit-down, Kimmel asked Clinton to read some of Trump’s mean tweets, which she picked randomly out of a bowl. One of them was the now-infamous tweet he wrote about O’Donnell.

Also Read: Hillary Clinton Can't Bring Herself to Read This One Trump Quote for Kimmel (Video)

The tweet was sent by Trump in 2006 after O’Donnell slammed him by calling him a “snake oil salesman,” for the way he handled a controversy surrounding his Miss USA pageant. Trump held a news conference announcing he would not fire then-Miss USA Tara Conner, following reports of alleged drug and alcohol abuse.

Trump’s tweet made national headlines during a Fox News debate last year when moderator Megan Kelly asked him about his disparaging comments toward women.

Trump, raising his finger, interrupted her: “Only Rosie O’Donnell,” he said with a smirk.